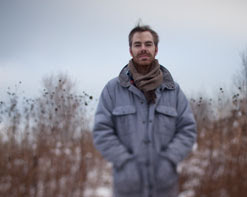 The Kinsella family has established themselves as indispensible contributors to indie music of this generation. Bands like Joan of Arc, American Football, Cap’n Jazz, and Owen all owe their place in indie-rock lore in varying degrees to the Kinsella family, brothers Tim and Mike, and cousin Nate. After his time performing with his Tim and Mike in Joan of Arc, a successful run in Make Believe with Tim, and engineering Owen recordings for Mike, Nate Kinsella has stepped to the forefront of the Kinsella family to bring us what may be the strongest offering yet under the name Birthmark.

His ability to create music that contains lyrics that reveal his different personalities and emotions gives way to the powerful musician that he has become and makes his newest release, Antibodies, a must-listen for fans everywhere. “I really do try to present myself as a positive person in normal every day life,” Kinsella says, and he does so through moving and profound lyricism. Through his music, Kinsella examines his own fears and faulty shortcomings by creating a contrast of how he views his own faults in relation to his self-proclaimed ability to keep on living if a loved one were taken away in his song “Pacifist Manifesto.” With that, these elements have proved to be the vibrant creations of Birthmark. The stunning range of tones and emotions are artfully crafted to produce feelings of raw emotions and courage. From inspiring root notes to vibrating lyricism, we see all that Birthmark possesses and transgresses from within the video “Big Man.”

Kinsella examines the concept that “there is no God” in his powerful ode to existence within the atmosphere he creates throughout the song “Big Man.” This philosophical take on the self promotes the above feelings that encompass the music of Birthmark. We watch as he subtly performs in front of the backdrop of a rock band that seems to override the existing elements of contemporary indie music. The band is seen rocking out, dressed all in white, as Birthmark himself finds peace within his questions pertaining to every day life. It is a ballad that emanates existentialism, and it is a song that helps maintain the ever-growing fluidity of Birthmark’s music.