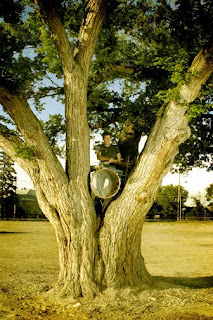 We’ve all heard that common complaint that everything that could be done in rock n’ roll has been done before. I mean, we had Captain Beefheart and Frank Zappa, for God’s sake, and that was way back in the 70s.
But Chad Van Gaalen a few years back emerged from a gritty basement in Calgary, Canada, armed with original instruments he constructed himself, and proved to us that there is always something someone can do to make the music fresh. Even if it means making it from scratch.

Having released two albums prior, Van Gaalen released a new CD of material titled Soft Airplane last Tuesday. Throughout this 13-track album, Van Gaalen moves us through lush soundscapes, stoner dreams and Neil-Young-like acoustic numbers. To accomplish this he uses his homemade instruments and electronic sound samples, as well as the traditional drums and guitar.

Check out Van Gaalen’s video for “Molten Light” below: