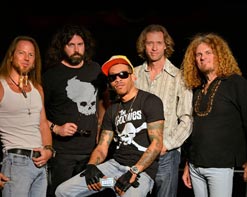 Chef Sean is an artist that lives life on his own terms. He’s made a name for himself as actor, appearing in feature length films alongside Forrest Whitaker and Jada Pinkett Smith, as well broadcast TV and national advertising campaigns. But despite his professional accomplishments on screen, he’s never allowed himself to become the sterile and artificial celebrity that many talents fall prey to. Instead, he uses his music and his collaborative band, Blaze, to deliver music that is honest, insightful, and delivered with no reservations whatsoever. Today, we present to you “Stash In The Hoopty” by Chef Sean and Blaze!

Blaze is a unique mixture of musicians from a variety of backgrounds, all with the common love of music between. When their talents combine into one, they put out a slick and fearless mixture of hip-hop and hard rock. Don’t let their appearances fool you either. The ones you’d peg as your rock guys can lay down a funky back beat just as much as the ones you might think bring the urban flavor can shred just as hard as anyone. It’s a unique experiment between genres, but it works so incredibly well!

“Stash In The Hoopty” is an unapologetic clip that doesn’t pull any punches and shows the sometimes brutal reality of life in the deepest parts of Los Angeles. Pieces of cold steel packing hot lead are never far out of reach. Illicit goods are traded, shipped, and sold between multiple parties. It might not be the most squeaky clean video, but it’s real. Sean and his crew cruise the streets, following the flow of the merchandise, and making sure that the plan goes off without a hitch. Their presence is enough to send the right message, and as long as everyone follows the rules, nobody will get hurt! We also bear witness to the invigorating and mesmerizing live performances throughout the clip, and you can be certain that they bring the party there as well.

We’re all pleased to be working with Chef Sean and Blaze to bring you this video of killer proportions. Anything we can do to help you see this video into your programming, please be in touch with Andy Gesner at HIP Video Promo! You can email info@HIPVideoPromo.com .

Chef Sean and Blaze "Stash in the Hoopty"