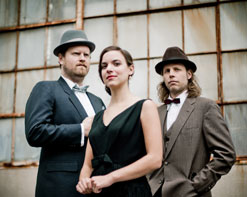 To accompany such a story with a fitting music video would take a directing team with a vision and a boldness to compliment the grandeur of “A House, A Home”, and that team has been found in director Daniel Fickle and production designer Mark Smith. They’ve taken on the task and produced a video that is so stunning that we are willing to bet that you will come back to this video immediately to take another look and absorb the meticulous attention to detail, both visually in the sets and in the top notch acting that the male and female lead give throughout. Over the course of the clip, they portray a couple that are confined in their space, but free in their spirits and imaginations, skipping from one ornately decorated room to another in just the blink of an eye. Perhaps a metaphor for the mental illness they suffer from and the feelings of being trapped in their own minds, it is nonetheless a touching look at how the feeling of love and dedication can overcome many worldly problems we may have and that sometimes all we need is somebody to share the load with.

We’re very excited to be working with Mark Smith and the entire Alialujah Choir crew to bring you this gorgeous new clip. We’re here to get you whatever it is you may need in order to get this video as much programming as possible, so don’t hesitate to be in touch! For more info, contact Andy Gesner at HIP Video Promo at 732-613-1779 or email at info@HIPVideoPromo.com. You can also visit www.HIPVideoPromo.com, www.Alialujah.com or www.DanielFickle.com for more info about Alialujah Choir.