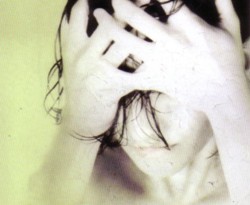 Seasons Greetings to all my programming friends! It’s Andy Gesner and the staff at HIP Video Promo with another intriguing video. Today, it’s our pleasure to introduce you to the twisted vision of Android Lust – a one-woman band whose influences range from atmospheric pop to industrial mayhem a la Nine Inch Nails. Born in Bangladesh, Android Lust auteur Shikhee has been exploring the cutting edge of desire, rage, and panic in her songs since her first independent releases in 1998. The Dividing is her initial release for Projekt Records, but it’s not her first mainstream exposure: her music has been featured inRoad Rules and The Real World, and Android Lust has been played (and mentioned on-air) during several episodes of CBS’s NCIS. This is boldly cinematic music – it generates images, animates phantasms, and calls to the listener from a dark beyond.

If you find this music seeping into your own dreams and nightmares, blame Shikhee’s unearthly singing. Whether purring in a strangled – but oddly seductive – whisper, groaning in feral desperation, or roaring in a raspy, inhuman shout, she maintains her icy reserve and cool detachment. She’s the woman in the mist, the girl behind the cloud: wracked in mysterious pain, visible, alluring but impossible to touch. At times, Shikhee even manages to channel the Broken English-era Marianne Faithful; drugged, despairing, walking the thin line between obsession and violence.

On The Dividing, Shikhee pairs that voice with musical settings that are similarly bleak and disquieting. The drum samples are bone-dry and brittle, and the machine snare smacks like skin on skin; synth riffs stutter and whir or dance sinuously, and deep, ominous pads fill out the tracks. The songs are minor-keyed and menacing, rife with disturbing sentiments, entreaties to ugly behavior, and moments of inexplicable (and possibly evil) ecstasy. “Stained” is a kiss-off that begins politely and quickly turns murderous: “I know not how to cease this feeling of hate in me”, she whispers at the lip of panic. The narrator spits lyrics of infection and disease, and when she reaches the release and wishes to see her addressee dead, you know she’s not being metaphorical.

Directed by Daniel Ouellette (production designer for David Bowie’s “Dead Man Walking”), produced by special-effects wizard Mark Larranaga (X-Men, Spiderman), and realized by special effects and conceptual mastermind Robert Morris of Mechanical Whispers, the “Stained” video is visually arresting and occasionally even frightening. The clip is shot in a claustrophobic mirrored cube, where Shikhee, rendered even more ghostly in black and white makeup, is confronted on all sides by her reflection. The Android Lust singer shields her brow behind her wet hair, her eyes behind a strip of gauze, and her mouth behind another – the two streamers make a black cross at the center of her face. She whispers the venomous lyrics from behind the streamer, the outline of her twisting lips visible through the cloth.

Without ever being gratuitous about it, the clip is also elegantly and beautifully ghastly: Shikhee drags a blade across her lips, and black blood pours down from the ceiling. Halfway through the video, a contorted human figure (Shikhee herself?) in a clear plastic sac wet with bubbling fluid hangs in the center of the cube; it slashes at the walls of its amniotic chamber with the same knife. At the conclusion of the video, the very cuts in the film secrete – the images stop, static lines fill the screen, and the black blood drips from the horizontal lines

HIP Video Promo is very proud and excited to be working with such a promising new artist. Android Lust has captured our attention and we hope you give this deserving avant-garde performer your ears and eyes. If you need more info, call Andy Gesner at (732) 613-1779, or email info@HIPVideoPromo.com. We have plenty of copies of the new The Dividing CD and we are here for you if you’d like to set up on-air giveaways. We also have some cool Android Lust refrigerator magnets and stickers for the die hard fans!