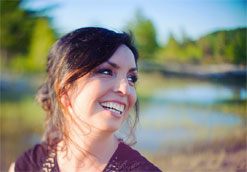 Though she’s long been associated with Traverse City, MI, Angela Josephine has a deep connection to Ireland. Motifs and melodies from the Celtic Isles are woven through her entire body of work. Sometimes these are subtle, and sometimes they’re as bold as an Ulster landscape. They were there on A Restful Sense of Urgency, the landmark album that established her as one of the brightest voices of the resurgent Northern Michigan arts scene. They were audible on the 2006 set Grace Exhaled, and they were unmistakably present on Stone Bright Solid, Volume 1, a 2012 collaboration with the Ypsilanti, MI producer and songwriter Chris Bathgate. “I’ve been inspired by the Northern Michigan landscape,” she says, “but just recently found out through ancestry that I may have connections to Northern Ireland. It makes the pull to that region even more discernable and my connection more profound.”

Now comes Daylight (Stone Bright Solid, Volume 2), which has already garnered praise from Guitar Girl, Cross Rhythms, Innocent Words, and many other independent music publications. For the set, she’s shot two gorgeous videos that showcase her embrace of the folk traditions of the British Isles. Helen Rollins, the Belfast-based director of “Go Easy” and “40 Days”, filmed these clips in Northern Ireland, and has made brilliant use of settings she knows well. And Josephine, who worked with the award-winning Irish choreographer Maureen Butler to create the videos, looks right at home.

The two new tracks continue Angela Josephine’s artistic relationship with Bathgate, who returns to the producer’s chair for Daylight. This time, he moves from behind the board to behind the mic: “Go Easy” is a duet between the sweet-voiced Bathgate and Josephine. “40 Days”, by contrast, is a summer storm of a track – an instrumental highlighted by Angela Josephine’s hammered dulcimer. These songs showcase the star’s remarkable versatility, her formidable instrumental skill, and her well-chronicled mastery of mood.

The video for the intimate “Go Easy” explores the breathtaking interior of Riddel’s Warehouse, a historic building in Belfast associated with the cast iron trade. The Irish actor Phil Dixon takes the part sung on the recording by Chris Bathgate, and joins Josephine in a stately but emotionally suggestive dance on the floor of the old industrial building. The expansive “40 Days” suggests dramatic scenery, and Rollins brings Josephine to the rugged cliffs of Northern Ulster for the clip. She stands on the edge of the earth with her dulcimer, and strikes the strings as the Irish Sea churns beneath her.

Angela Josephine is a truly exceptional talent we’re thrilled to throw our full support behind! Here at HIP, we’re eager to share “Go Easy” and “40 Days” with the world and hope you embrace these new visuals as much as we have. Please don’t hesitate to check them out and include them in your regular programming and online presentations. Rest assured we’ll have plenty of Angela Josephine merch to set up online/on-air contests and giveaways throughout the campaign, and we’d be more than happy to send you some if you’d like. For more about Angela Josephine, you can contact Andy Gesner and the HIP Video Promo team at (732)-613-1779 or email us at info@HIPVideoPromo.com. You can also visit www.AngelaJosephine.com for more info.