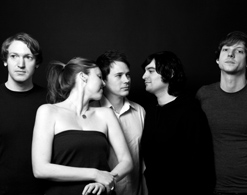 Greetings fellow indie rockers! It’s Andy Gesner and the staff from HIP Video Promo, here with a fascinating new band from post-industrial Brooklyn. Indie groups often like to play with expectation and representation in videos – they’ll show you a close-up of a band, and then the camera will pull back to give the viewer a glimpse of the shooting set. It’s a way of inviting the viewer “behind the scenes,” downplaying the rock video’s tendency to monumentalize its subject. Anthem In makes a big sound – one that delivers on the promise of their band name – but there’s also something unmistakably intimate about their approach. Consequently, they’ve made a clever video for “Down”, their lead single, that undermines convention, breaks the “fourth wall” time and again, and generates sympathy for the band and its cheery, winning lead vocalist.

Then again, warming up to Anthem In isn’t too hard to do. The quintet is easily one of the most likable bands on the NYC club circuit, regularly winning over hip city audiences with their intriguing narratives, instantly-memorable choruses, and manifest enthusiasm for rock performance. They’re identifiable, too: they look like just the sort of group you’d expect to see charming listeners in Brooklyn nightspots. Unsurprisingly, the local press has fallen in love – The Deli Magazine, The Big Takeover, and scores of Gothamite webloggers have sung the band’s praises. Released earlier this month, their self-titled debut has already caught discerning ears all over the New York metro area and drawn apt comparisons to Teenage Fanclub, and Death Cab For Cutie; an upcoming tour will introduce the Anthem In sound to a national audience.

But no matter where they’ll travel this summer, they’re New Yorkers first, and that’s made apparent to anybody who listens carefully to the album. Anthem In features several sonic portraits of the band’s home – DUMBO, a visually-striking district composed of old warehouses, towering bridges, and ancient streets sloping gently toward the East River. These recordings capture the eerie feel of the neighborhood after dusk; they’re dream-haunted, artful, architecturally impressive and seductive. Given the band’s strong identification with their surroundings, the choice to shoot the clip for “Down” on the streets of DUMBO seems an inevitable one (fyi – DUMBO is actually an acronym meaning Down Under the Manhattan Bridge Overpass).

A fruitful one, too – the quiet post-industrial streets and red-brick walls match the tenor of the track perfectly. Anthem In frontman Allen Orr wanders through the neighborhood, stopping periodically to sing “Down” toward the camera; for most of these shots, he appears to be in a neutral environment with an orange background. Really, he’s pursued by a couple of stagehands carrying a large piece of orange cardboard. Director Will Joines pans back from time to time to make the scenario clear, and whenever he does, Orr walks away from the crew. They follow him and set up wherever he goes – they appear to be a bit of a nuisance to him, but mostly he plays along. He does, however, seem to prefer the long shots – the ones that encompass both the streets and the warehouses, and the predicament of the indie musician asked to absent himself from his surroundings for the sake of his performance.

It’s a huge pleasure for us to have the opportunity to work together with the band and the team at Quiet/Loud Records to bring you this kickin’ new clip. They’ve hooked us up with plenty of copies of Anthem In for your on-air giveaway needs. The band will also be heading out on the road soon so let us know if you’d like to catch up with them when they come through your local market! If you need more info, call Andy Gesner at 732-613-1779 or e-mail us at info@HIPVideoPromo.com.