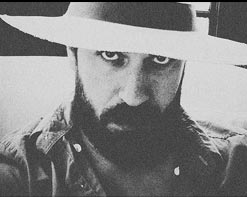 Born in Tropoja, a small town nestled in the Albanian Alps; Armand Margjeka fell in love with Rock and Roll at age 12. Western influences, MTV and a fortuitous tape featuring Little Richard, Fats Domino and Elvis Presley, among others, had a significant impact on Armand. “I spent all summer watching MTV Europe in the 90’s, fascinated by a combination of the West and pop culture. I dreamed about going to America.”

Music videos and tapes of some of his favorite artists taught Margjeka more about the language than what he learned in school. He picked up guitar during his years at an art school in Albania and by 18 he’d moved to the states. Margjeka moved to Birmingham, Alabama after college and worked on writing and recording with his alt-country band Buffalo Black. Together they released two digital EP’s, Honeysuckle on 39th Street and Restless Heart. Margjeka followed this up with an eponymous album of American roots rock, of mostly Margjeka originals, but he wanted to expand beyond the Americana sound.

Margjeka released his debut solo album Margo Margo in 2011. “I want to do music without any preconceived parameters. I like to combine unexpected elements in my music.” Margo Margo features a blend of intimate bedroom recordings coupled with studio tracks recorded by seasoned session players in Nashville. Armand Margjeka’s sophomore release Hummingbird is slated for a Spring 2014 release from PIPEANDGUN and Communicating Vessels.

Today we bring you the title track video from Hummingbird, which is widely diverse experiment in just how much can be done with only black and white. Using a variety of techniques including animation, live video, and still art, director Ryan Meyer weaves together a clip that is a visual kin to the simple yet urgent approach of Armand’s sound. The diminuitive hummingbird is the constant throughout, with its elegant and fluid beauty being put on full display, offering an artistic look into this exceptional animal. One shot in particular of a hummingbird feeding from a flower in slow motion is an appropriate metaphor for the music of Armand Margjeka; it feels simple and effortless, yet behind the veil there is a frenetic spirit at work, churning out a true thing of beauty.

We would love to hook you up with whatever you may need to show your support for Armand Margjeka. Please don’t hesitate to get in touch and let us know! For more information please contact Andy Gesner and the HIP Video Promo team at (732)-613-1779 or email us at HIPVideoPromo@Gmail.com. You can also visit www.CommunicatingVessels.net/ and www.Facebook.com/ArmandMargjeka/ for more info.