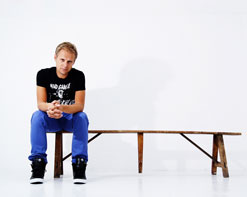 Label:
ARMADA MUSIC
Video:
“THIS IS WHAT IT FEELS LIKE”
Director:
Svenno Koemans
Add Date:
April 1, 2013

Van Buuren is the number one ranked DJ having one DJ Magazine’s Top 100 DJs fan poll a record of five times, including winning four consecutive years between 2007 and 2010, and again in 2012. Armin’s 2008 studio album Imagine entered the Dutch album chart at number one, which was a first for a dance music artist in Dutch music history. In 2011, he was appointed Officer of the Order of Orange Nassau for his services to music. And without further aduei, HIP Video Promo presents his newest video for “This Is What It Feels Like.”

This fresh and energetic video plays at the lightheartedness that exists within the realms of Armin Van Buuren’s characteristics as an artist. Teaming up with Trevor Guthrie on this single, “This Is What It Feels Like” is a catchy song that will leave you wanting more! We watch as Van Buuren and Guthrie race their dualing Shelby Mustang Cobras across the open desert, and ultimately competing against each other to win the heart of a sexy, young female they meet in their travels. Ron Jeremy even makes an appearance in the clip (don’t worry, it’s totally PG!) The competition is fierce but friendly and put it all together, “This Is What It Feels Like” is not only a killer tune but also makes for a stellar music video!

The appeal of Armin Van Buuren’s music is currently modern and contemporary, and his ability to present the world with fresh dance beats and hypnotic rhythms is truly captivating. For more information on this exciting new artist, please contact Andy Gesner and the HIP Video Promo staff at (732)-613-1779 or email us at info@HIPVideoPromo.com. You can also visit www.ArmadaMusic.com or www.ArminVanBuuren.com for more info on Armin Van Buuren.