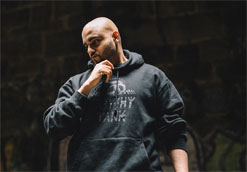 There are few forces in popular music quite as formidable as a great producer on a mission. Just as a good film director inevitably leaves his stamp on the films he makes, a skillful producer at the helm of a musical project guarantees consistency, vision, and a distinct aural signature that can’t be counterfeited. Ashok Kailath – who records as ash.ØK – is a producer like that. The Unraveled, his debut album, is an amalgam of styles and moods, incorporating elements from dance music, world music, progressive rock, modern pop, and left-field experimental sounds. Yet no matter what direction he travels or how far out he goes, the music he makes is always identifiably his. You’ll know an ash.ØK song the moment you press play – no matter which of his talented collaborators he’s called on for any given track.

Yes, the Pennsylvanian producer has friends, and he knows how to match them with music that lets them shine. More than two dozen artists contribute to The Unraveled, including international reggaeton sensation Conkarah, virtuoso Indian percussionist Jomy George, and the raucous, pan-ethnic West Philadelphia Orchestra. Many songs on the record stand out and have garnered significant press, but his latest single “Holding Sand” reaches a new level in terms of pushing the limits of juxtaposing live and electronic sounds.

The music, which interweaves trap and hip-hop influences over mournful eastern melodies, carries the solemn weight of a romance being slowly undone. To create the perfect dramatic visual for this work, ash.ØK didn’t hesitate to pull in a visual powerhouse, enlisting super directors Ife Adeniji and Sonny Bonoho (IFE+BONOHO) to conceptualize and film the video. The duo, who have worked with the likes of Snoop Dog, Bootsy Collins, Nappy Roots, Sara Jackson-Holman and many others, created a lush, Game of Thrones-inspired storyline that is both cinematic and heartbreaking.

We’re profoundly thrilled to be working with ash.ØK to bring you this wildly ambitious new visual. It’s our sincere hope that you and your viewers will flock to “Holding Sand”, share it on your socials, and add it to your programming in a timely fashion. As always, you can contact Andy Gesner and the HIP Video Promo team at (732)-613-1779, email us at info@HIPVideoPromo.com, or visit www.ash0K.com for more info on ash.ØK.