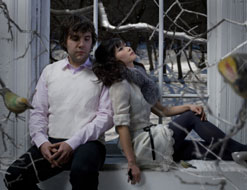 Hi cherished programmers! It’s Andy Gesner and the staff from HIP Video Promo, here with a clip that perfectly matches the track that it accompanies. Asobi Seksu makes gauzy, quietly glamorous, and gorgeously-blurred pop, decorated with shimmering guitar textures, crisp beats, and the alluring, candy-coated vocals of Yuki Chikudate. “Transparence”, their latest single, is appropriately-titled: it’s a luminous, warm, and brilliant sunbeam of a song. The band has paired it with a video suffused with golden summer light — a magnificent idyll set in a park. The fetching Chikudate lays suggestively in the grass as she sings, her lovely face partially obscured by the greenery. And as the song climaxes amidst a cascade of phased and distorted six-string, the footage is suddenly and intentionally clouded. Chikudate keeps purring as the light envelops her — and she recedes, as if into a dream.

To call “Transparence” a standout cut on Hush, Asobi Seksu’s third and latest album, is at once accurate and misleading. It’s accurate because it’s a magnificent summation of everything the band does so well: classic pop refracted and gently stretched, and doused in delicious guitar feedback. And it’s misleading because all twelve tracks on Hush share Asobi Seksu’s trademark radiance. In ’06, the band stole the hearts of pop fans worldwide with underground favoriteCitrus; with Hush, the New York City combo serves notice that they won’t be giving them back anytime soon.

Although every bit of Hush is meticulously-sculpted and sharply-presented, this is no studio-only project. Before they were international indiepop stars, Asobi Seksu were NYC club favorites; in concert, Chikudate is an expressive synthesizer player and a winning frontwoman. This band tours relentlessly: they’ve played clubs and festivals in the United States, Europe, and Asia, and later this month, they’ll be making their first trip to South America. It doesn’t seem possible that James Hanna could simulate his guitar pyrotechnics at live shows — but then he does, and the sonic effect is captivating.

Hanna gets plenty of screen time in Major Lightner’s clip for “Transparence”: he’s as pleased to bathe in the sunshine as his frontwoman is. But this is Yuki Chikudate’s show, and why not?, she’s a vision, and one that looks as if it was conjured by the sunshine. As she walks barefoot through the forest, director Lightner allows daylight to saturate the footage — until it isn’t clear where the sunbeams end and Chikudate begins. It all serves to underscore the atmospheric feel of “Transparence” — the perfect soundtrack to a late-summer swoon.

We are thrilled to be working with Seth Hubbard and the Polyvinyl crew to bring you another amazing Asobi Seksu video! If you need more info, call Andy Gesner at 732-613-1779 or e-mail us at info@HIPVideoPromo.com. You can also visitwww.PolyvinylRecords.com to find out more about Asobi Seksu.

For info about Asobi Seksu’s “Me & Mary” video, click HERE