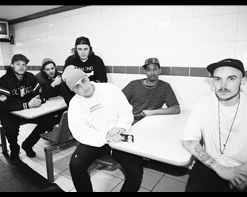 Astroid Boys, from Cardiff, UK, consists of two MC’s, a DJ, a drummer, guitarist, producer, and even their own mascot! The group exploded onto the UK music scene in 2011, spearheaded by MC’s Traxx and Benji full force attack of the stage every single night. They made names for themselves by supporting artists like Skream, Rusko, Pro Green, and High Contrast, and have received positive press everywhere from Kerrang Radio and BBC Radio 1.

They’ve clearly been making their mark overseas, but now it’s time to unleash these Welsh wonders onto the US music scene. Fortunately for us, they’re doing so by giving us not one, but two videos for us to sink our teeth into. The first video is for their newest single “BADA$$”, which the group released via their own independent label Brain Juice Recordings in the UK. The video brings together all of the influences you might hear at a Astroid Boys’ live show, whether that be scorching guitar and drums, blistering flow, or floor-shaking DJ production. All in all, the boys are here to have a good time and channel the spirit and fun of earlier trailblazers like The Beastie Boys.

For the second video, “Minging” they stick with the winning formula. Whether they’re strolling the back alleys, hosting the mother of all ragers, or crammed into the back of a compact automobile, it’s clear that the party is happening wherever the Astroid Boys decide to make their place.

Both songs are a part of the new full length album, Lounging With Luther, which is slated for release on Brain Juice Recordings/ Dublin Records, and will be sure to shatter all expectations and put this group on the national map, both here in the US, as well as bolstering their standing in the UK. We’re here to hook you up with whatever you may need so please contact us at (732)-613-1779 or email us at info@HIPVideoPromo.com . You can also visit incee9.wix.com/AstroidBoys or www.Facebook.com/AstroidBoys for more info on Astroid Boys.