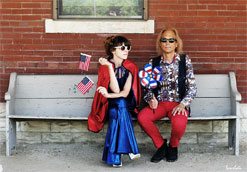 AV Super Sunshine is the brightest at the ball. With his drive and energy to be a star, he does more than just shine, he radiates. With his motto, “Peace, Love & Modern Classic Rock with Bell Bottom Bass” he operates from a place of love as he expresses his creativity through a trance. With the world today being so cold, he redefines his darkest memories and paints over his past with a lighter brush.

Gracing us from Wisconsin, AV has traveled all over the world in the pursuit of music and truth. Since meeting in 2014, he and his star-crossed lover Philomena have created something beautiful during their lowest times. In 2015 he put out his first EP Just Like Kurt, followed by his first studio album release, Baby Goodbye. In 2016 he released Bass Face which was described as “nothing less than a psychedelic good vibration audio experience.” To highlight the success of this album they released a remix edition the following year.

Inspired by the 70s-era Aerosmith, Zeppelin and Jimi Hendrix, AV Super Sunshine rocks out hard and love even harder on the new track “TIME BOMB” from his upcoming release Candyland (a dance remix version of the album is also in the works). Currently sitting at #1 on the Starfleet Music Pool Crossover Chart and Dance Chart, #2 on the Euro Indie Music Chart, and #2 on the Euro Indie Top 200, “TIME BOMB” was recorded in Nashville with producer James House and mega-engineer Joe Costa. DJ Michael Bradford added a dance club spin, making the song starfleet – and dance-floor – ready.

“TIME BOMB” was written after AV went cold-turkey from the anti-depressant Pristiq. “Time Bomb” was the perfect song hook because I felt like I was about to explode,” he shares. Influenced by The Runaways’ classic song, “Cherry Bomb” it has the same kick to it, but a little sweeter. Today AV graces us with his new music video for “TIME BOMB”. Directed by Jared Sagal, the video opens with AV and Philomena glazing at the city skyline. It takes a turn as they begin running away from nothing. As a visual representation of running out the clock, they try to escape a socially constructed concept that holds no actual bounds. Their final destination reveals itself to be a parking meter as they place the quarter into the slot- symbolizing that they are still held by society’s rules despite their rejection of them. Burning out and defying all odds once again, the video closes where it began, as it fades but never burns out.

We’re honored to be working with AV Super Sunshine once again, and we hope you embrace the new clip for “TIME BOMB.” We’d love to see this video added to your cherished programming and online presentations in a timely fashion! Rest assured we’ll have plenty of AV Super Sunshine merch available for on-air contests and giveaways so don’t hesitate to get in touch. For more information on AV Super Sunshine please contact Andy Gesner and the HIP Video Promo team at (732)-613-1779 or email us at info@HIPVideoPromo.com. You can also check out instagram.com/AVSuperSunshine and AVSuperSunshine.com for recent updates on this flower child.