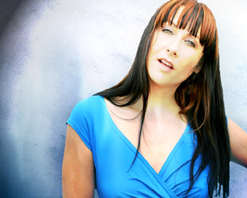 Hello friends of the music video world! It’s Andy Gesner and the staff from HIP Video Promo, here to shower some good vibes on viewing audiences with a brand new clip from an explosive dance-music combo. With another World Series appearance in full swing (not to mention the usual autumn revelry), they’re partying up in Boston this week – and Beantown has never looked better than it does in the clip for “So Alive”. The Avalon Superstar video features sweeping vistas of the skyline, the Charles, Back Bay, Oliver Street, the famous CITGO sign, and many other sights familiar to Boston regulars. British house singer and songwriter Rita Campbell is the visitor ready to capture the town, and she walks the streets – and shops the boutiques – like a true jet-set sophisticate.

Then again, Campbell and writing partner Simon Langford are no strangers to Massachusetts. Billy Mead, the third member of Avalon Superstar, is a longtime Boston dance-music stalwart, and co-proprietor of the world-class Groove Factory recording studio. The well-traveled house producer has built a bridge from Beantown to London, cutting tracks with (among others) Lara McAllen, Andrea Britton, Amanda Wilson (Freemasons), and Steve Smith of Dirty Vegas. It was Smith who contributed much of the music to “All My Love”, the Avalon Superstar debut single that tore up the clubs in the summer of 2006.

But it was another well-known English musician – electronica producer Stonebridge – who introduced the British Langford and the Bostonian Mead to charismatic Rita Campbell. The powerful singer is a U.K. hit maker in her own right: it’s her big voice on Chris Bangs’ “Warm Weather”, she’s worked with Brand New Heavies, and she co-wrote the chart-topping “Stomp” for Steps. Simon Langford’s resume is no less impressive – he’s a member of the Soul Seekerz and Dreamcatcher, and he’s hit the pop charts on both sides of the Atlantic with Dannii Minogue, little sister of Kylie.

So the members of Avalon Superstar bring a staggering degree of dance-floor experience to their collaboration – and it’s all there in their music. “So Alive” is the sort of masterful house track that inspires club deejays and ravers alike; it’ll be an instant favorite wherever sophisticated dance music is spun. This isn’t just a great groove, it’s a great song: like all the best pop, “So Alive” boasts an expressive melody, a huge sing-along chorus, an irresistible beat, and a dynamic performance from a distinctive vocalist.

Campbell’s star-turn in the “So Alive” clip is tremendous fun; she’s up at a quarter after seven to take on the day, and even after sundown, her energy hasn’t flagged a bit. She sings out as she strides down the sidewalk in a blue dress; later, standing atop a bridge, the wind whips back her brown tresses. But the true focus of the clip is Billy Mead’s hometown, which gets the sort of glitzy, glamorous treatment usually reserved for Manhattan, Los Angeles, or Miami. Judicious use of zoom lenses, stop-action and time-lapse footage – especially during the after-dark shots – communicates the excitement of a town in motion. And just in case you’ve forgotten what you’re looking at, a fire truck rolls by, “Boston” in clear block letters on its side.

It is with great pleasure that we are teaming up with Billy Mead and the team at Groove Factory Records to bring you this super cool new clip! They’ve been kind enough to hook us up with copies of the “So Alive” CD single for your on-air giveaway needs, so give us a shout if you’d like to get your hands on some and we’ll be sure to set you up straight away! If you need more info, call Andy Gesner at 732-613-1779 or e-mail us at info@HIPVideoPromo.com. You can also visit Itunes to find out more about Avalon Superstar and Rita Campbell.