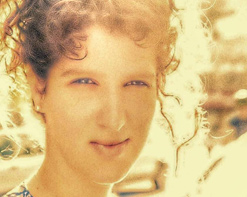 AVIDYA is a one-of-a-kind musical act and the mastermind of one of NYC’s most compelling and intriguing artists and impresarios, Stephanie Carlin. The name AVIDYA has its roots in Buddhism, and, to put it simply, represents the ailments we have in our consciousness. This abstract definition of the word is heavily reflected in her no holds barred musical offerings. There are so many emotions, motifs, and metaphors with every melody she makes, and it can be hard to find one definitive meaning. This finely crafted and fully realized musical mosaic will challenge you in ways you never thought that music could. Today, we bring you two stunning examples of her earthy, organic art, the videos for “The Human Struggle” and “On The Bright Side.”

At the heart of AVIDYA is the soul of Stephanie Carlin, an exceptional songwriter and music-making visionary. Soon after she released her solo EP titled The Agony and Ecstasy of…, she took to the Internet to find a band that shared her spiritual passion. After they released their full-length album Tree of Series, AVIDYA received praise all the way from the music hub MTV Hive to Yoga Teacher Magazine. The broad spectrum that AVIDYA compels is what has caused her to secure such a large, loyal and diverse fan base.

The video for “The Human Struggle” opens with a shot of a man dealing with the banality of waking up and checking his phone before he heading outside into an open field with purpose. He hastily runs into the woods with nothing on besides his underwear. Until now everything was calm and tranquil, but as the man gets clothed and begins practicing his routine, AVIDYA’s music becomes ferocious and explodes with energy. The camera shots become jarring and the viewer is left with no choice but to take in all the energy from the audio and visual stimuli.

“On The Bright Side” shifts the tone to a breathtaking love story. The song and the dancers flow like liquid, running directly into the viewer’s psyche. The male and female dancers are in a heated struggle with one another, pulling and pushing each other away like waves against a beach. The climactic ending is as much startling as it is tragic – the female is forced to leave the male, and the viewer is left deliberating if she is a wistful victim or a femme champion.

Everyone here at HIP Video Promo is extremely excited to be working alongside such a deep and powerful musical tsunami as Stephanie Carlin. The salient and ethereal messages of peace and tranquility she shares with us are a surefire way to keep morale high and boost productivity in anyone that is listening. Please contact Andy Gesner and the HIP Video Promo team at (732)-613-1779 or email us at info@HIPVideoPromo.com. You can also visit www.FreeSpiritsMusic.com for more info on AVIDYA.