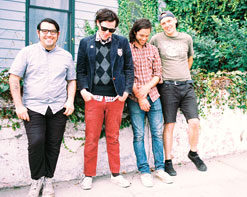 Beach Slang are a band who have garnered a lot of attention considering that they’ve only released two 7″s: 2014’s Cheap Thrills On A Dead End Street and its companion Who Would Ever Want Something So Broken? This has all brought us to the much-anticipated full length The Things We Do To Find People Who Feel Like Us and the brand new video “Bad Art and Weirdo Ideas.”

Refreshingly this Philadelphia based act have built their hype the old­ fashioned way, without any gimmicks or marketing teams, which makes sense when you consider that frontman and writer James Alex cut his teeth in the Pennsylvania pop­-punk act Weston while drummer JP Flexner and bassist Ed McNulty also play in buzzed about projects such as Ex­Friends and Crybaby.

However there’s something indefinable about Beach Slang’s music that evokes the spirit of punk and juxtaposes it into something that’s as brutally honest as it is infectiously catchy.

That feeling of youth and vulnerability also lie at the core of Beach Slang’s music, which is part punk, part pop and all catharsis. It references the ghosts of The Replacements but keeps one foot firmly rooted in the present.

The video for “Bad Art and Weirdo Ideas” premiered on Pitchfork, which describes the video as simply “kids goofing around on the beach before sharing a reflective moment looking out to sea.” The band also offers up a true bit of gritty punk rock performance footage, straight from the basement. The slow motion shots of the band feel resplendent and direct, as if it is a private concert for one. It may sound simple as a concept, but in execution it is all things Beach Slang. It’s fun and it’s serious. It’s sad but it isn’t. It’s Beach Slang.

We’re always thrilled to bring you the best of the best from Polyvinyl Records, and this is no different! If you would like to catch Beach Slang on the road or to get a copy of the new album, The Things We Do To Find People Who Feel Like Us, please don’t hesitate to get in touch! For more information on Beach Slang, please contact Andy Gesner at (732) 613-1779, or e-mail the HIP Video Promo staff at info@HIPVideoPromo.com . You can also visit http://www.BeachSlang.com/ or http://www.PolyvinylRecords.com/ for more info.