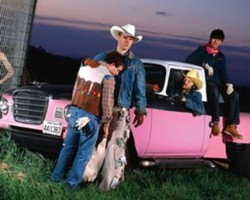 Hello to all of my music video pals! It’s Andy Gesner and the staff here at HIP Video Promo. Think you know what Saddle Creek music sounds like? No other band on the label’s illustrious roster will prepare you adequately for Beep Beep. The latest band to emerge from Omaha sounds nothing like the rest of the Saddle Creek stable – or, in fact, any other band we can think of. There’s a little wired Brainiac to their sound, a little abrasive Enon or Ex Models, maybe even some XTC at their most angular. But this band of artful Nebraskans have channeled their love of aggro-punk guitar and off-kilter rhythms – and some really, really bad workplace experiences – into a musical statement wholly their own.

Which isn’t to say that the Saddle Creek family doesn’t make its presence felt in their music. Business Casual was recorded by A.J. Mogis (who performed similar duties for the brilliant new record from The Good Life) and mixed by Now It’s Overhead frontman (and Saddle Creek sonic impresario) Andy LeMaster, and Beep Beep shares bassist Joel Peterson with The Faint and Broken Spindles. Group members Chris Hughes and Eric Bemberger have played in bands with members of The Faint, Bright Eyes, and Head of Femur. What Beep Beep shares with their friends and labelmates is an uncompromising intelligence and willingness to experiment, conceptual skill, and a skewed sense of humor.

It wouldn’t exactly be accurate to call Business Casual a concept album – but then it wouldn’t be inaccurate, either. Images of workplace discontent and corporate malaise dominate the poetic, fragmentary lyrics. Bemberger delivers the songs in a scratchy caterwaul that he slings across the tracks with a desperate abandon; he’s funny at times, but his wit is invariably dark. “Executive Foliage” is, if anything, one of the most far-out songs on the album: a blurt of vicious, slashing guitar, new wave backbeat, and tumbling, disturbing, associative phrases about sex, office politics, furniture, potted ferns.

The office plant – that lonesome creature that squats in the corner of cubicles – is for Bemberger a metaphor for the corporate containment of human desire. Just as the executive foliage of the title grows stiffly under fluorescent light, the cubicle dweller is stunted, boxed in, penned, shut into an unnatural and stifling calm. In the ambitious and often hilarious clip for the two-minute single, the office greenery is a major (and slightly sinister) character. It’s a fern, and its long, suggestively finger-like fronds make it the obsession of a young and harried clerk.

In the video for “Executive Foliage”, directed by Saddle Creek’s own Jason Kulbel, the viewer finds a worker (played by Chris Hughes) sitting in a blanched, offensively beige office, filled with antiquated business equipment – an adding machine, a cheap typewriter, a clunky Bakelite telephone. He lusts after a secretary in a neighboring office, watches a smarmy co-employee (a projection from his own mind? What he wishes the secretary were?) on a crummy-looking fliptop screen, and takes orders from an embalmed-looking supervisor who floats in to the office as if he’s on a conveyor belt. Throughout, his confidante and companion is the plant in the corner. He surreptitiously photocopies its leaves in a Xerox machine, stamps pages marked with the silhouettes of its fronds, and succumbing to the chaos of impulse that’s sublimated in the deadening office atmosphere, he finds himself dancing wildly and laying prostrate beneath it. As the camera shuffles from quick alarming cut to quick alarming cut, the fern coughs dirt onto his face. Is he soiled, planted, or buried?

Here at HIP we’re as excited as ever to be working with our good friends at Saddle Creek, and we’re ready with an ample supply of Business Casual CDs to meet your Beep Beep needs. Anyone who’d like to do an on-air giveaway or anything special for these intriguing musicians, we’re here for you. If you need more info call Andy Gesner at 732-613-1779, or email info@HIPVideoPromo.com. You can visit www.Saddle-creek.com, or iTunes to find out more about Saddle Creek’s latest buzz band.