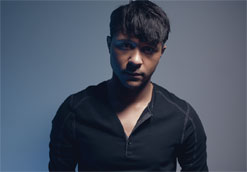 Passion, grit, fire, personality: these qualities aren’t always associated with electronic pop and dance music, but Belle VEX isn’t an average artist. The prolific New England singer-songwriter and producer makes dance songs that speak to the heart – songs that tell a personal story of defiance, resilience, and unquenchable desire. He keeps his beats tight, his vocals smart and soulful, his words thoughtful, and his music videos compulsively watchable. Given the tireless pace with which he works, it’s a sure bet that he’s always got “Something New” for us.

This latest banger comes on the heels of Fifteen Minutes Of Fame, a glittering six-song EP that firmly established Belle VEX as a dance-pop innovator, a clear communicator, and a subtly sophisticated lyricist. Belle VEX’s songs are full of clever wordplay, shifting meanings, and sharp production that calls attention to the emotional trajectory of the storytelling. He wants you to move, but he’s also got plenty to say. Belle VEX videos have always augmented the mood of the songs: the clip for “Famous”, a standout cut from Fifteen Minutes, is a study in destabilization, shot with a shaky handheld camera that captured the artist under a hot, red, swinging light bulb. The recent “Make it Good For Her” video foregrounded Belle VEX’s sense of humor, but its caustic edge is always apparent.

Belle VEX says of “Something New”, “I was just tired. Every now and then you come to a point where you just need to take a short break and re-energize yourself, but this was different. This was almost like a career crisis. I felt as if everything that I was doing was pointless and that there was no “good” ending. This wasn’t depression, just a turning point…. I needed something new. Something to move forward in a new way and see things in a new light. It’s the only way I saw change.” The song is pure come-on, but it’s also a challenge – he’s after a girl on the dance floor, but he’s also daring her to imagine a relationship deeper than a typical hook-up. A song like this one requires some swagger, and video director Rob Fitzgerald has coaxed a brash, confident performance from the star. He’s both the romantic aspirant, chasing the woman of his dreams, and a dispassionate assessor, sitting behind the table at a casting call. Belle VEX switches between the roles seamlessly, radiating discernment and lust, temperance and conviction, all in equal measure.

Nobody who sees this video (or any of his others) will be surprised to learn that Belle VEX initially trained as an actor, and turned to recording when the call of music-making became irresistible to him. In order to get to where he is, he’s had to overcome obstacles that would have stopped a less dedicated artist cold, including two catastrophic car accidents. But he’s found his footing and persevered, and now he’s ready to spread his voice – and his ideas – to the world. He says of the video and working with Fitzgerald, “This is the first time I let go of the steering wheel. On all of my other music videos, I was “hands on”. I’m talking the camera doesn’t leave my sight. This time I left all of that up to Rob. I distanced myself so far from this video that I was able to just be an artist for once and not have to worry about the back end for a bit. It was a relief to have someone like Rob pick up the reigns because I was so jaded at the time. To me, a video was just a video, but Rob saw more…. Shooting videos is not easy and working alongside him definitely re-ignited some of that fire inside that had burned out.”

Here at HIP Video Promo we’re stoked to once again be championing Belle VEX and share with you the newly minted visual for “Something New.” We’d love to see this video added into your cherished programming and online presentations in a timely fashion, so please don’t hesitate to check it out! Rest assured we’ll have plenty of Belle VEX merch available for on-air contests and giveaways so let us know if you’d like to get your hands on some. For more information on Belle VEX please contact Andy Gesner and the HIP Video Promo team at (732)-613-1779 or email us at info@HIPVideoPromo.com. You can also check out www.bellevex.com for more info.

For info about other Belle VEX videos, click HERE.

One thought on “Belle VEX “Something New””