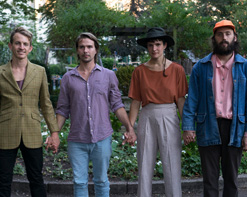 It’s a mesmerizing thing, a hypnotic instrument: Adrianne Lenker’s voice can be hushed and intimate, but it can also reach emotional peaks, suddenly and fiercely. Big Thief, the band that supports and expands Lenker’s songs, has been drawing growing audiences into its emotional soundscapes over the past two years, listeners captivated by the Brooklyn band’s assured instrumental performances and Lenker’s storytelling.

Anticipation is running high for Capacity, the band’s upcoming second album. Masterpiece, the Big Thief debut, was embraced by fans and critics alike. The All-Music Guide called the set a wall-to-wall artful expression, Pitchfork praised the songwriting and the band’s sense of balance, NPR lauded Lenker’s stunning voice and the group’s intense rhythms. “Mythological Beauty,” the first track released from Capacity (the album will be out on Saddle Creek on June 9) extends and deepens the musical and lyrical themes of Masterpiece. It’s a tale of a mother coping with a severely wounded child, and staggering – but remaining steady – under the burden of that immense responsibility.

This song is based on an actual incident, an injury the songwriter suffered when she was very young. As Lenker recently explained, ” ‘Mythological Beauty’ reveals the origin of the scar on the right side of my head. It is a conversation between parent and child; between child and child; between the child within the parent and the child within the child; and between the parent within the child and the parent within the parent.” With her close-cropped hair and her penetrating eyes, Lenker is a natural subject for music video, and director Vanessa Haddad makes her the focus of the mystical, beautifully-shot clip for “Mythological Beauty.”

Lenker and her bandmate and longtime collaborator Buck Meek are adventurers, journeying together over a gorgeous, snow-covered mountain. She’s alert and wary; he’s shaky, straggling, doing his best to keep up with her. When he falls, exhausted, Lenker does what any heroine would – she slings his limp body over her shoulders and carries on. To save him requires magical intervention: a ritual that hovers somewhere between surgery and a religious rite that involves bandmates James Krivchenia and Max Oleartchik (and Lenker’s mother), and which generates some seriously altered states. Gripping like an episode of a fantasy series and as emotionally provocative as a whispered confession, the “Mythological Beauty” clip underscores both the communicative power of Big Thief and the band’s unerring ability to provoke reverberations in the unconscious of its listeners.

We’re very excited to be have the chance to work with the good folks at Saddle Creek once again! It is our sincere hope that you will embrace this video like we have, and we are here to do what we can to get it into your programming. The band will be in all corners of the US this summer, including dates with Conor Oberst, Twain, The Head and the Heart, and more. If you’d like to catch up with the group when they come to your market, please contact Andy Gesner and the HIP Video Promo staff at (732)-613-1779, or email us at info@HIPVideoPromo.com. You can also visit www.BigThief.net or www.Saddle-Creek.com for more info on Big Thief.