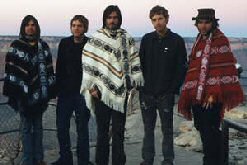 Hey everyone! It’s Andy Gesner and the staff here at HIP Video Promo pinching myself that we have been able to bring you so many great videos already this month. We very much appreciate your support of all the independent labels we champion. This next vid continues on our trend of engaging, eclectic indie rock clips and is coming to you courtesy of our new friends at New York City based Tee Pee Records. Tee Pee has been fighting the good rock and roll fight for nine years and the label’s star has never been shining so brightly as it is now in 2004.

Brian Jonestown Massacre is the musical brainchild of underground rock giant Anton Newcombe. A raucous rebel, Newcombe is a true enigma that has been plugging away, fighting the big label machine (and lambasting those most deserving of it) for over a decade. The band has gone through numerous lineup changes and labels in that time, but despite that (and the toll that the rock n’ roll lifestyle has taken), Newcombe’s artistic vision remains clear and his attitude frankly unrepentant. His brilliant interpretations of psychedelic musical landscapes are the best part of the new BJM CD, And This Is Our Music… available now on Tee Pee Records. Newcombe, though being one of the most important yet underappreciated artists among the indie rock elite, will be featured in the highly touted film Dig! at the Sundance Film Festival chronicling his friendship, obsession and eventual fallout with Dandy Warhols leader Courtney Taylor.

“When Jokers Attack” happens to be a tribute to the legendary Dandy Warhols and a great introduction to a band a lot of people have heard of, but not HEARD (regrettably). Directed by longtime pal (and one time BJM bassist) Charles Mehling (he directed the latest Black Rebel Motorcycle Club video), this Brian Jonestown Massacre clip is a dreamy dream sequence of a video fueled by the layered and logic defying twists and transitions associated with both deep rem sleep and the structure of the song itself. The clip features images drawn from the sort of East Indian artistic sensibilities that the band’s namesake was instrumental in introducing into Western rock in the mid-sixties. One particular recurring motif is a painting in grisly detail of one of the more brutally aggressive sorts of those multi-limbed Hindu avatars.

Our protagonist, androgynous but ostensibly female and also resembling, unsurprisingly, a young Brian Jones with eyes made up in a harlequin slant; rises astrally from her cozy bed and leaves the room. When we next encounter her, she’s clad in a fur trimmed Carnaby Street polka dot mini dress holding, but not playing, a 12-string guitar. She delivers a somnolent, almost narcotic rendition of the song, finally rising through space and time to find her dream self drawn back to her slumbering body. This is a very well shot and well crafted vid!

Here at HIP Video we are fully stocked with Brian Jonestown Massacre goodies, including copies of the new CD, t-shirts, 3 song samplers and stickers galore. We are proud to team up with Tony Presedo and Dale Bookout at Tee Pee to present the “Tee Pee Fistful of Rock” contest. Any programmer that adds the BJM “When Jokers Attack” video in the month of February will enter a contest to win the entire Tee Pee Records catalog (teepeerecords.com, link below), including such heavy rock buzz bands as Raging Slab and Atomic Bitch Wax. For more info call 732-613-1779 or you can email us at info@HIPVideoPromo.com. To find out more about Brian Jonestown Massacre (and see what they consider “good shit”), visit thebrianjonestownmassacre.com (link below)