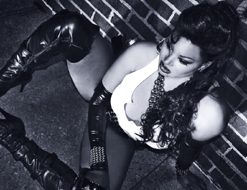 Here at HIP Video Promo, we’re always on the lookout for unique singles, and “Come’on In My Kitchen” is easily one of the most unclassifiable, forward-looking singles we’ve heard in a long time. It’s a visionary amalgam of urban sound and country-blues attitude — one that’s simultaneously a Southern Gothic nightmare and a streetwise come-on. Elements of experimental hip-hop, Timbaland-style future music, dirty rock, avant-soul, sampladelic space-pop, and deep gospel are held together by a sultry, irresistibly-twisted vocal performance by Black Madam. She sounds simultaneously turned on, pissed off, and dangerously excited — and she pulls the listener into her dark fantasy with both hands.

It’s something that fans have come to expect from the young Philadelphian with the electrifying vocal approach: immediacy, controversy, good humor, and an avid interest in things that go bump in the night. Black Madam lists Behold A Pale Horse and Chariots Of The Gods as favorite books and Alistair Crowley as an influence, and she’s not afraid to nod toward the occult in the name of pop. “Devil’s Pie” — a single written for cult director Brian Flemming’s The Beast — used the spirit world as a metaphor for global conspiracy and nefarious secrets. “Come’on In My Kitchen” casts a diabolical shadow, too: this track plays like the soundtrack to the weirdest dream you’ve ever had. No matter how outrageously she purrs and growls, and no matter how deep and literary she goes, she always remembers to put her maddeningly-catchy hooks front and center.

Robert L. Mickels and Brian Bentz’s clip for “Come’on In My Kitchen” is, as you might expect, a haunted reverie. We first glimpse Black Madam asleep in an antique bed — but hers is no ordinary crib. It’s a Gothic mansion in an abandoned glade, and lightning crackles around its high towers and stone walls. Her bedroom is busy with spellbooks and flickering candles, a stuffed owl stands perched on the dresser, and skulls and classical busts decorate the corners. A record spins on a vintage turntable. In short, this is exactly the sort of building you’d expect a sorceress to inhabit — and she spends the rest of the clip engaged in the kind of spellbinding pop alchemy that only the most outre pop stars know how to concoct.

The object of her incantation is a young man who, at first glance, looks perfectly normal — an outsider in Black Madam’s enchanted forest. But it quickly becomes apparent that he’s a warlock, too, and one in touch with a wellspring of primitive magic. Their dance sequences together are racy, astonishing, revealing, and compulsively watchable. To be sure, the choreography in the “Come’on In My Kitchen” clip casts a spell all its own — demonstrating beyond doubt that Black Madam has many methods of witchcraft at her disposal.

We are very proud to be working with PV Windslowe and Wrath Entertainment to bring you this spellbinding new clip. If you need more info, call Andy Gesner at 732-613-1779 or e-mail us at info@HIPVideoPromo.com.