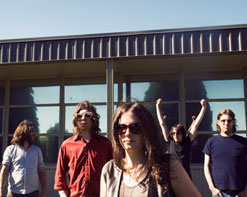 Greetings programming pals, it’s Andy Gesner and the HIP Video Promo staff bringing you a hot off the presses follow up video to one of our biggest summer hits. Playing off the buzz of their already successful video “Old Fangs,” Black Mountain is coming out straightaway with a follow-up clip that’s a bit less trippy but still maintains their signature seventies feel in “The Hair Song.” As expected from Black Mountain, “The Hair Song” is another classic rock throwback, but this time frontman Stephen McBean splits vocals with fellow bandmate Amber Webber, resulting in a carefully orchestrated duet and setting the stage for the story being told in the video.

Here, we follow a young guy and girl’s chance encounter amidst them living their everyday lives: him skateboarding the streets of an otherwise desolate town and her hanging out with her small group of friends. As they both cross a bridge, they exchange coy looks, unsure if their first meeting was their last. What later brings these two together is Black Mountain, who is performing “The Hair Song” in the middle of a forest, their stage set in a building’s ruins. Between McBean and Webber sharing vocals on this track and the eventual reunion of the video’s main characters, it’s simply an uplifting clip to watch as the sun shines behind them all.

“The Hair Song” is very much an ideal follow-up to “Old Fangs.” Laden with progressions and a flawless duet between McBean and Webber both belting, “Let your love come undone / Don’t suffer your crime / Let love in your heart / Take control,” the video acts as a great complement.

This clip times quite perfectly with the upcoming release of Black Mountain’s third album, Wilderness Heart, which is due out in mid-September. The album proceeds the 2008 success In The Future, which found Black Mountain as the finalists of the 2008 Polaris Music Prize and nominees for Best Alternative Album in the 2009 Juno Awards. With this, expectations are high on Wilderness Heart. According to #, “Webber described the album as full of ‘to-the-point’ rock songs, no epic ten-minute-plus tracks among them, compact, with less embellishments than before.”

We’re excited to be working with Black Mountain again and are grateful to the crew at Jagjaguwar. The band will be touring all over the United States this fall, and we would love to hook you up with the opportunity to catch them live and sit down for a video interview, so please be in touch if you’d like to hook that up. We will also soon have copies of Wilderness Heartavailable for you to check out, so get your requests in now! If you need more info, call Andy Gesner at 732-613-1779 or e-mail us at info@HIPVideoPromo.com.