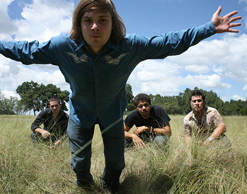 Hello fellow rockers! It’s Andy Gesner and the staff from HIP Video Promo, back with a beautifully-shot video from the thoughtful new rock band that stole SXSW. In their hometown of San Antonio, they’re already stars (they’re favorites of the City alternative weekly, theExpress-News, and the much-read S.A. Rocks weblog); in the rest of the Lone Star State, they’re spoken of by music aficionados as a group on the rise. Now, the wide release of their self-titled debut seems certain to show the nation what Texas already knows: Blowing Trees have the sound, the talent, and the live energy to connect with a mass audience. Their intelligent pop-rock is already deep, layered and nuanced; on Blowing Trees, Producer Dave Castell (Blue October) has given these powerful songs a bright, radio-ready aura.

The quartet was, without a doubt, one of the most discussed bands at South By Southwest. This year, Blowing Trees rocked both the Fuse and the PureVolume showcase, and were selected as one of the Featured Emerging Artists in the corporate-sponsored SXSW sweepstakes. Since March, the band’s reputation has spread by word of mouth – Matt Pinfield is a fan, and has played their music on his Sirius Radio show –and Blowing Trees has chosen to cement their foundation by touring Texas relentlessly. Those who’ll pack the upcoming shows will experience a rare treat: a band of sharp young writers who marry thought-provoking lyrics and singalong melodies to a majestic tapestry of sound.

A band as conscious of detail as Blowing Trees might seem like a good bet in the studio, and the aesthetic success of their ambitious debut has justified the faith of their many rabid fans. Dramatic as Mars Volta, cinematic as the Flaming Lips or Arcade Fire, and as carefully-conceptualized as Wish You Were Here, Blowing Trees also contains many pop charms. “The Day The World Left Me”, the lead single, is quintessential Blowing Trees: a message song appointed with the proper balance of grit and gloss (and a fist-pumping chorus, too!) Frontman Chris Maddin delivers the lyric in a howl of passion; it’s bracing, and moving, and it announces the coming of a singer with something to shout about.

If there was any doubt, the clip for “The Day The World Left Me” can put it to rest: Blowing Trees are a terrific-looking band, too. Playing in an old warehouse, they hurl the song at the camera, demonstrating the kinetics and the intensity that have made them such a live attraction. Directors Emma Branch and Carlos Cruz Sol position Maddin directly beneath a hanging lamp, and capture the shadows that travel across his face as he sings; he looks more than a bit unhinged, and it’s awfully compelling. Elsewhere, in a junkyard crammed with electronic equipment, two hapless men doze, putter around, and fuss with wires. Shots of Maddin playing guitar are juxtaposed with those of a white-bearded old man in a chair hammering away on his own acoustic – all while another one watches the sands pour through an hourglass. Later, these images of helplessness and decay are counterposed with other: a teenaged boy wearing homemade wings, two boys wrestling in gas masks. It’s ominous, weird, symbolically-rich and undeniably compelling – much like Blowing Trees’s captivating music.

Big props to Gary Jay at Land Shark Promotion and the Glassnote Records team for bringing us the spectacular new clip. They’ve been kind enough to set us up with plenty of copies of their self-titled full length for your on-air giveaway needs so drop us a line if you’d like to get your hands on some. If you need more info, call Andy Gesner at 732-613-1779 or e-mail us at info@HIPVideoPromo.com. You can also visit Facebook to find out more about Blowing Trees.