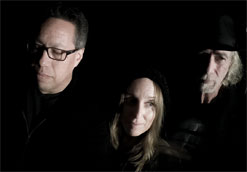 The video for Blue Stone’s latest single, “Chasing Helium,” may look like a dream sequence, but this right here is a much-needed wake-up call. When everything feels so push-pull, the blissed-out images of “Chasing Helium” are a reminder that sometimes it’s ok to take a moment and sit out the struggle.

Blue Stone is the well-established US-based composer/producer duo of Robert Smith and Bill Walters. Smith is the mind behind Bella Sonus, the underground cult-status electronic outfit whose sound laid the groundwork for Blue Stone’s ethereal, exploratory orchestrations. Though electronic-based, Blue Stone weaves in organic sounds, natural percussion, tribal rhythms and lush analog instrumentation, to continually push their sound forward. Guest female vocalists give many of their tracks a final otherworldly touch, for music that is all their own.

“Chasing Helium” may be the best example of their layered, dreamy song-work. Co-written by indie producer and Global Heist Recordings partner, Michael Baker, it features the vocals of Susan Bodily, who recently signed to Global Heist. “Chasing Helium” is a split Global Heist / Neurodisc release, and its finishing touches come courtesy of The Regency production house collective.

Check out Baker’s direction and production, and it becomes clear that that this isn’t just the best way to visualize “Chasing Helium,” it’s the only way. The video isn’t just another beautiful backdrop; it acts as the final lyric and gets the last word in. Throughout, Bodily’s breathy, angelic melodies paint a pretty bleak picture of a life less-lived. She pulls no punches with the opener: “It’s just the way that it goes / You get high and wake up alone / It seems no one ever calls / You wonder why you bother to pay for a phone.”

But pay attention to the message that the visuals are sneaking in here. Scene after psychedelic scene of escape, of freedom. A race across the open road of the American Southwest. Hundreds of birds diving and wheeling against a late-stage sunset. We could go on, but you really need to see it for yourself. We’re not saying “Chasing Helium” is gonna change your life, but give it the attention it deserves, and it just might change your day.

Here at HIP Video Promo, it’s an honor to be working with such compelling musical visionaries like Blue Stone, and we hope the “Chasing Helium” video inspires and invigorates you! We’d be elated to see this video added to your cherished programming and online presentations in a timely fashion, so please check it out as soon as you can. Rest assured we’ll have plenty of terrific Blue Stone merch available for on-air contests and giveaways, so if you’d like to get your hands on some, reach out to us and we’ll hook you up. For more information on Blue Stone please contact Andy Gesner and the HIP Video Promo team at (732)-613-1779 or email us at info@HIPVideoPromo.com. You can also check out www.instagram.com/bluestonemusic for the latest updates.