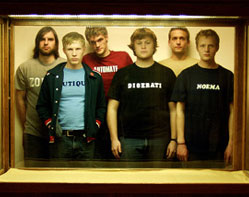 Happy autumn everybody! It’s Andy Gesner and the staff from HIP Video Promo, here to share another video with you from an emerging indie band completely worthy of your attention. Brazil burst out of Muncie, Indiana in 2001 with a sound wholly their own: loud, desperate, and aggressive, yet harmonically sophisticated and compositionally daring. The young band showed themselves willing to take chances with arrangements and song-structure, and to push their uncompromising tracks in uncommon directions. A Hostage And The Meaning Of Life, the group’s first proper album, merges new wave and prog-rock inventiveness with the direct approach of punk, and introduced the world to the impassioned voice of frontman Jonathon Newby.

As you might expect from a band that named its debut recording after a philosophical concept (2002’s Dasein EP), Brazil is unafraid to be complicated. The six-piece group features three treble-range instrumentalists – two guitarists and a piano player. Frequently, all three instrumentalists play at once, defying arrangement logic – and gravity – by producing soundscapes that are rich, immersive, and cleverly conceived. On A Hostage And The Meaning Of Life, songs strike a remarkable balance between experimentalism and immediacy. The tracks may be multi-sectioned, but thanks to Newby’s focused outrage, they’re almost always single-minded.

“Escape” might not be quite as ferocious as the standard Brazil cut, but it still packs a punch. Alternating between tense piano triplets and scalding guitar riffs, the song is a precisely-structured, ambitious piece of state-of-the-art modern rock. Newby’s affecting vocals wind tightly through the track like a thin thread; taut, quivering, stretched to a breaking point, but never snapping.

Director Michael Grodner illustrates that tension – that sense of precariousness and jeopardy that permeates Brazil’s music – in his artful clip for “Escape”. Shot mainly in cool blues and institutional greens, the video communicates urban alienation and solitude amidst an almost otherworldly calm. Beginning with time-lapsed footage of clouds streaming over a deserted skyline (and berserk city clocks swinging their second and minute hands at a threatening pace), the narrative clip follows a high-school aged young man through the nearly-depopulated landscape. He runs through corporate plazas and rides up elevators, hides out in an abandoned tower block, scribbles in a journal, and bleeds a glowing green when he cuts his hand with a razor. Throughout the clip, he is pursued by a faceless figure: like him, the spectre is hooded. It paces the halls slowly, shows up in small crowds, and chases its quarry with an aloof but unswerving attention. It’s clear that Death is coming, and there is no way to escape it.

Is the main character dreaming? We’ve got reason to believe he is: the clip shows the protagonist jarring himself awake a few times. Yet his circumstances don’t change as much as he’d probably like them to: the first time he comes to consciousness, he’s still on the same deserted bus where we first see him. Later in the clip, he awakens in a suburban bedroom. Here, the light has changed from harsh blue to warm yellow, and the implication is that he’s in his own space at last. But he’s uneasy, and as he retraces his steps to the abandoned building he visited in his visions. There, he finds the journal and its disturbed scribblings – and in the archway behind him, a spectral, hooded figure waits to greet him.

Here at HIP we are very excited to be working with such an illustrious label as the southern California based Fearless Records. We are huge fans of all of the great indie rock bands on this label, and it is an absolute honor to add Fearless to our HIP family! That being said, we are extremely excited that Brazil is our first Fearless band that we will be working with. These boys might be young, but don’t let that deceive you. They most definitely bring the rock! They are currently co-headlining a tour with Emery. Also included on this action-packed bill are From First To Last, Name Taken, Emanuel, and A Thorn For Every Heart. If you want to check them out when they come to a city near you or get copies of their CD for on-air giveaways, please get in touch.

To stir up even more excitement, we are bringing you the “Brazil/Fearless Records CD Giveaway” contest. This enticing package will include all the current Fearless Records catalog including t-shirts and awesome goodies. To be entered, all you have to do is add the Brazil “Escape” video to your programming during the month of October. If you need more info call Andy Gesner at 732-613-1779, or email info@HIPVideoPromo.com or check out Fearless Records