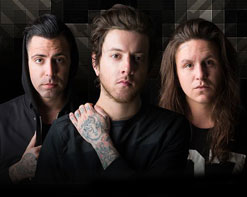 Since first bursting on to the scene in 2008, Breathe Carolina has struck an inimitable alchemy between electronic music and rock. It’s that delicate balance, which consistently vaulted them ahead of the proverbial curve and into a lane of their own. With their new single “Platinum Hearts,” they’re in a position to lay down their own stretch of electro-pop interstate!

They’ve pieced together a string of hits that have endeared them to fans across the globe, each time seemingly reinventing and topping themselves. Their smash hits “Blackout” and “Find Someone” positioned them as emerging leaders on the dance floor, and their 2014 full length Savages, blew the roof off, debuting at #1 on Billboard’s Dance/Electronic Albums chart.

After the immensely popular “Anywhere But Home” with APEK, Breathe Carolina turns to the Armada Trice imprint with another mind-blowing creation. Warming our “Platinum Hearts” with stunning melodies, smashing progressions and guest vocalist KARRA’s sublime voice, there’s no telling how far this tune could actually go. But one thing’s for certain: this record is tremendous!

For the “Platinum Hearts” video focuses on a male and female duo as they frantically search the city nights for one another. Weaving in and out streets and buildings, they follow their own hearts to find each other in a race against time. In order to heighten the spirit and energy of the video, the group turned to one of their strongest weapons in their arsenal: their live show. Mixing in live performance footage with the story creates a one-two punch that simultaneously feels intimate and grand.

We’re proud to bring you another exceptional offering from the Armada Music crew, and we’re positive this is something your viewers will wholeheartedly embrace! Please contact Andy Gesner and the HIP Video Promo staff at (732)-613-1779 or e-mail us at info@HIPVideoPromo.com . You can also visit http://www.ArmadaMusic.com/ or http://www.BreatheCarolina.net/ for more info.