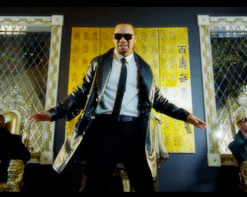 Hello programming friends, it’s Andy Gesner bringing you round two of another standout video from an NFL superstar who has a passion for music to match his ferocity on the gridiron. By now, if you follow the 24 hour tabloid news cycle, you’ve probably heard Bret Lockett’s name mentioned on several occasions in association with some nefarious reality television “star”. But unlike people who are famous just for being on TV, Bret Lockett has earned his fame through an intense amount of hard work and dedication. After firmly establishing his physical talents in the NFL with the New England Patriots, Bret then took his talents behind the microphone and began crafting his musical career. He’s also a model, recording artist, entrepreneur and charity spokesperson for the “Youth of Tomorrow” organization. Last year we brought you the video for “Let’s Go”, which was a smooth offering showing the romantic side of Bret and how he works it with the ladies. This time around, he’s bringing a decidedly more business-minded approach to the table with the new clip for “Get It All”.

We’re very pleased to once again be working with Bret Lockett and Erik Hicks at Inception Entertainment to bring you this hot new video. We’re also stocked with plenty of copies of the Inception mixture, so please don’t hesitate to drop us a line to get your hands on one. For more info contact Andy Gesner at 732-613-1779 or email at info@HIPVideoPromo.com. You can also visit www.GetItAllCampaign.com to find out more about Bret Lockett and the Get It All Campaign.