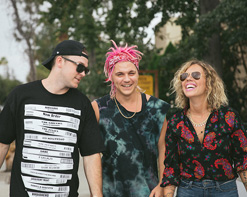 Los Angeles EDM duo, BRKLYN have a knack for thinking outside the box. One look at the braided pink mohawk assures new fans that they’re in for something special. Cameron Alexander and Cody Nadeau combine live instrumentation, cinematic percussion, resonant soaring vocal melodies and aggressive synthesizers to create the group’s inventive style. After releasing a massive string of singles from 2015 to present, BRKLYN have reached a new peak of hype in preparation for their newest single, “I’m On Somethin'”.

Past singles including “Miracle”, “Steal Your Heart”, and “Heart Of The City” have been remixed and re-released endlessly throughout the EDM community thanks to adoration of a constantly growing and feverishly active BRKLYN fanbase. With over 205,000 monthly listeners on Spotify, regular rotation on Sirius XM BPM for the past few months, and club residencies in Las Vegas, San Diego, & LA, it is clear that the movement behind this budding group is never stagnant. Bigger names in the genre are catching on too. The LA natives were recently featured on EDM heavyweights, Tritonal’s Sirius Radio podcast entitled, “Tritonia”, where they performed a live guest mix to thousands of new listeners.

The official music video for “I’m On Somethin'” opens with the ever-fashionable Alexander and Nadeau, along with a clan of gorgeous women, showing off their urban-runway looks. The group meets up on a California back street for a party under the sun. As soon as the BRKYLN boys roll up in their vintage yellow Chevy pickup truck, the dancing begins. When the sun begins to set, they corral the group into the back of the truck and sneak their way to a rooftop for the ultimate view of the sunset to cap off the evening. The guest vocal performance by Jocelyn Alice (signed to The Chainsmokers’ Disruptor/Sony imprint) guides the vibes of the song as the words flow out of her cotton-candy-colored soul. “I’m On Somethin'” engulfes a room with an aura of positivity, fun times, and an irrepressible need to dance.

We are absolutely ecstatic to be teaming up with a new group as exciting as BRKLYN to bring you the “I’m On Somethin'” music video and see it included in your regular programming. Don’t hesitate to let us know what we can do on our end to make that happen. Please contact Andy Gesner and the HIP Video Promo team at (732)-613-1779, email us at info@HIPVideoPromo.com. You can also visit www.Facebook.com/BRKLYNmusic for more info on BRKLYN.