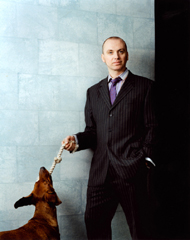 Hello to all of my music video pals! It’s Andy Gesner and the staff here at HIP Video Promo, back once more with another action-packed video from an intriguing new musical artist who’s enjoying major success on commercial radio! New York City is filled with one-man musical projects – perfectionist auteurs hunched over the blue light of computer screens, meticulously arranging and rearranging tracks until they achieve satisfaction. For the most part, these records sound like solo projects: fussy, airtight, and maybe a little claustrophobic. Not so with Cantinero. Christopher Hicken (the man behind the project) may indeed have assembled his songs digitally, but you’d never know it from a cursory listen. Somehow, despite never leaving his bedroom studio, Hicken has managed to approximate the warmth, the excitement, and the comfortable complexity of a live rock group. Cantinero coaxes the soul out of the machine.

It helps that he’s got talented friends. Hicken is a British expat, but he has been living on the Lower East Side for more than a decade. He’s been a part of the New York City music scene for years, and he puts his associations to work for him on Championship Boxing, his debut album. Hicken includes guest contributions from Johnny Cragg and Richard Steel (Spacehog), John Deley (Dido), and Frank Ferrer (The The) to the digital blender – and even his dogs Ruby and Max are credited in the liner notes! An ambitious pop project, the album brilliantly synthesizes influences as disparate as modern rock, Beatlesque psychedelia, IDM, and trip-hop. Unifying the twelve tracks on Championship Boxing are Hicken’s excellent vocals: sprightly, poppish, communicative, radio-friendly but never ostentatious.

The songcraft is stellar. Hicken has a terrific ear for melody and knows his way around a sophisticated chord change, and he integrates the pieces of these occasionally complex pop songs seamlessly. “Make Me An Offer”, the current single, is a deceptively complicated assembly: the song consists of three distinct sections (each maddeningly catchy in their own right), and integrates a dizzy string sample into the chorus. But it’s testament to Hicken’s arranging skill that the dynamic flow of the track never breaks for a second. Defying the gravitational laws of modern recording, the computer-generated Cantinero simply sounds like a great, relaxed rock and roll band.

Years of tending bar on the Lower East Side of Manhattan have fostered empathy in Hicken, and also given him a backlog of painful stories about strained relationships. Championship Boxing is appropriately named: these are combative tales of big-city disappointment, and love gone wrong. In “Make Me An Offer”, romance has been perverted into a complex economic transaction – surely something Hicken witnessed many times from the safe side of the bartender’s station. The clip for the single extends the logic of exploitation, and pushes it even further: the come-ons and propositions are reimagined as the crass commercial solicitations of late-night television commercials.

In this video, Hicken proves himself an elastic small-screen performer, taking on the roles of (among others) QVC pitchman, attorney-for-hire, big city jewelry salesman, and pyramid-scheme mastermind. In the most hilarious sequence, Hicken grins maniacally and twirls around in a forest in a parody of pharmaceutical anti-depressant spots. (“Do you have feelings of emotion?,” the screen asks us in the requisite soothing purple type). Ambiguous lines from the song are projected on the screen in flashing red letters, and the title is framed in two-dimensional video starburst so familiar to anybody who has seen a cheap advert on New York City television. In fact, this video is loaded with text: almost every scenario is accompanied by satirical “fine print” at the bottom of the screen. It’s almost impossible to catch it all in one viewing, but it’s all very funny, so multiple viewings are encouraged!

HIP Video Promo is very proud and excited to be working with such a promising new artist. We have plenty of copies of theChampionship Boxing CD for on-air giveaways and want nothing more than to make sure your viewers are dialed in to this engaging new artist. If you need more info call Andy Gesner at 732-613-1779, or email info@HIPVideoPromo.com.