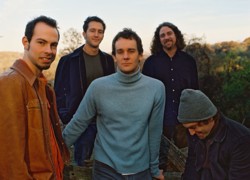 Greetings to programmers coast to coast! It’s Andy Gesner and the staff from HIP Video Promo with a compelling new video from a current buzz band on an auspicious veteran label. We’re thrilled to be working with the legendary Vanguard Records to bring you the latest video from Carbon Leaf. Many of us over here at HIP have been listening to Vanguard recordings our entire lives – Phil Ochs, Joan Baez, Chicago blues, the landmark chronicling of the Newport Folk Festival during the sixties, and more contemporary offerings like Julia Fordham, Big Bad Voodoo Daddy, and the latest album by Camper Van Beethoven. We’ve come to expect the highest quality from this imprint, and once again, Vanguard has delivered.

Indian Summer is Carbon Leaf’s debut with Vanguard, but theirs is a name you might recognize if you’re a regular concertgoer on the East Coast. The Virginia-based band has opened shows for Dave Matthews, has self-released five critically acclaimed albums, and has toured relentlessly to support their indie recordings. A decade’s worth of hard work paid off in 2003 when Dick Clark named the five-piece the best unsigned band in the country at the American Music Awards. The deal with Vanguard Records followed shortly thereafter.

Carbon Leaf’s sound on Indian Summer is catchy and radio-friendly to be sure, with the occassional hint of Celtic influence tucked in with the bevy of big hooks and sing along choruses. Fellow Old Dominion resident David Lowery of Camper Van Beethoven (Carbon Leaf recorded the album in Richmond, and kept the sessions solidly Virginian) co-produced Indian Summer with great sensitivity, striking a lovely balance between the group’s modern rock aspirations and its excellence in traditional forms.

The result? A gorgeous album filled with big, aching ballads and spirited mid-tempo numbers, played with consummate skill and sensitivity. “A Life Less Ordinary” is the lead single, and is perhaps the least trad-minded production on Indian Summer – but even here, the Celtic heartbeat is evident.

A song as rich-sounding and beautiful as “A Life Less Ordinary” requires a well-cinematographed video, and Carbon Leaf has delivered: this clip features breathtaking desert footage of ragged mountains, grasslands and cactus trees. But this video also showcases the well-known whimsical side of the band – that will toward polite mischief that hides behind Privett’s impish grin. The members of Carbon Leaf appear in the clip, but the protagonist of the video is a well traveled tumbleweed.

We watch the weed roll down dirt paths, jauntily spinning in time with the music. He (because it’s definitely a male tumbleweed) stops to gaze at a note and a picture of a flower; then, resolved, he hitches a ride with a trucker to the big city – beating out the members of Carbon Leaf in the process. The truck driver chats amicably with the tumbleweed – he’s an all right fellow – and the next thing we know, our weed is bopping along the metropolitan sidewalks. Treated rudely by street sweepers and passersby, he takes to a local pub, finishes a bottle of whisky, and is bounced from the bar. Down and out in the urban jungle, kicked by bullies and bums, he finally finds the object of his quest in a store window. The video ends with a happy shot of the tumbleweed embracing his flower.

Here at HIP we are extremely excited to work with Carbon Leaf, a band of substance and style on a label filled with history. We have plenty of copies of the new CD, Indian Summer for on air giveaways and if you would like an interview while Carbon Leaf is on their tour with Big Head Todd and the Monsters, we will be thrilled to hook you up. The tour is ongoing, so please don’t hesitate to get in touch. If you need more info call Andy Gesner at 732-613-1779, or email info@HIPVideoPromo.com. Please visit www.vanguardrecords.com or www.CarbonLeaf.com at the links below to learn all about this great new artist.