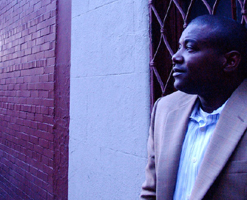 Hello cherished programmer, it’s Andy Gesner and the staff from HIP Video Promo, here to introduce America to a gorgeous new soul voice from our backyard. Suburban and exurban Essex County, NJ is a quiet area – bucolic train-towns and mini-cities, all clustered together on the express line through Newark to NYC. But it’s a musical area, too, one with its own traditions, underground record shops, and coffee-house circuit. Small folk-soul venues thrive in sleepy towns like Summit, multi-ethnic havens such Montclair, and even the more populous hubs of Maplewood and South Orange. Turn your attention to any of these clubs on any given night, and there’s a pretty good chance you’ll hear the softly radiant sounds of Chris Alleyne.

Musical assessment is a notoriously objective science, but it’s hard to believe that anybody wouldn’t agree that the London-born and Jersey-raised Alleyne is a magnificent singer. His performances are sweet, lilting, emotionally revealing, caressing, effortless. When Alleyne wraps his pipes around a soul ballad, he does so with the ease and assurance of a star. He’s been compared to Smokey Robinson, Gerald LeVert, Peter Gabriel, and even Marty Balin of the Jefferson Airplane: classic voices, every one. Yet the music he makes is resolutely current – like all good soul, there’s a timeless quality to it, but songs like the smoldering “Saturday’s Hero” would sound perfectly at home in a contemporary radio set. “Saturday’s Hero” is, above all else, a showcase for Alleyne’s voice. But it’s also a well-constructed and crisply-played piece of pop-soul, shaded with muted six-string, delicate percussion, and ghostly reverb. And in between the song’s unforgettable choruses, Alleyne steps aside for a moment to share space with guitarist Tom Lucas. His eight-bar solo is soaring, majestic, and expressive, and it adds grace and sophistication to an already-nuanced track.

Other songs on Alleyne’s debut EP share the fire of “Saturday’s Hero”: “The Way Things Used To Be” is an energetic pop-rock workout, and “Missing You” is an aching soul ballads with its roots deep in the gospel tradition. Like the EP’s title track, these cuts have the mark of lived experience; they’re honest, direct, spirited, and truthful. But “Saturday’s Hero” is the standout cut and the singer’s calling-card, so it’s only appropriate that it’s also the first Chris Alleyne song to be accompanied by a music video.

The “Saturday’s Hero” clip is, like the song, classy, elegant, introspective, artistic, and strategically understated. Shot on a shoestring budget, it nonetheless manages to communicate nostalgia, longing, and reserves of unspoken feeling. It opens with a series of old still photographs – we’re not told whether or not these are of Chris Alleyne himself, but they still feel like slivers of cherished memory. They hover in space, each floating in an oval of soft light. Before long, the photos are replaced by images of Alleyne and his band; they float slowly from corer to corner, each one concentrating on his performance. The six screens-within-screens turn counterclockwise – the images combine and blur, join and part, buoyed by the elegance of the music.

We’re thrilled to be working with Chris Alleyne and the crew at Devine Soul Records. They have set us up with a ton of copies of the “Saturday’s Hero” EP and we will gladly forward some your way for on air giveaways upon request. If you need more info, call Andy Gesner at 732-613-1779 or e-mail us at info@HIPVideoPomo.com. You can also visit www.DevineSoulRecords.com to find out more about Chris Alleyne.