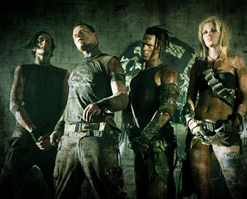 Hello programming friends, it’s Andy Gesner and the staff from HIP Video Promo with a clip from an electronica rock act guaranteed to help you work your aggressions out. For the past year (at least), we’ve been bombarded by messages from men in sharp suits who believe they know what’s best for us. Yet many people still feel like they’re being misled – that the “official” word is no better than double-talk, and that the real agenda of those in power is to keep us complacent and silent. Such an authority figure appears in the Combichrist video for “Sent To Destroy”. He appears on a television (where else?), and as he lectures the captive audience, the ugly subtext flashes on the screen in near-subliminal bursts of print. Combichrist frontman Andy LaPlegua gives the TV speaker exactly what he deserves – a sledgehammer straight to the face of the monitor.

LaPlegua is used to handling heavy weaponry. For years, the Norwegian vocalist, programmer and producer has been one of the most confrontational figures in electronic music. LaPlegua’s projects rock hard and groove harder, and he performs with an unbridled intensity rare in any genre. With his tattoos, his outrageous wardrobe, his muscles, and his spiked-up hair, he looks the part of the provocateur, too, and his videos are reliably incendiary. And then there’s his subject matter: Combichrist lyrics are outspoken, opinionated, sexually provocative, and ear-catching. Here’s a group whose breakthrough disc was titled Everybody Hates You, and who named their most recent full-length What The Fuck Is Wrong With You People? Yes, Andy LaPlegua is looking to shake you up.

The blistering latest single from Combichrist, does exactly that. Over propulsive, pounding beats and thick, distorted synth lines, LaPlegua roars “your god sent us to destroy”. The “Sent To Destroy” clip begins with footage of the enemy: the tight-smiling spokesman of a government or corporation, taking to the airwaves to make sure that the product moves. His true intentions are made clear in the fleeting captions that are superimposed, word by word, over his face as he speaks: “eat yourself – they die outside our walls”, “constant terror”, “you are nothing without the product”. Such a convincing performance is not surprising to us, considering the man in the TV is famed actor Bill Moseley. The machine gets its comeuppance at the hands of LaPlegua and his friends, and that’s gratifying to watch – but there’s also terrific footage of the band in action. The “Sent To Destroy” video shows off the band at its best: two drumkits, a cutting-edge synth on an elastic stand, grease, sweat, and all the musicians going as hard as they can.

Big thanks to the Metropolis Records crew for bringing us this awesome new video! We’re ready to hook you up with whatever you may need Combichrist-related, so please drop us a line! If you need more info, call Andy Gesner at 732-613-1779 or e-mail us at info@HIPVideoPromo.com. You can also visit www.Metropolis-Records.com, or www.Combichrist.com to find out more about Combichrist.