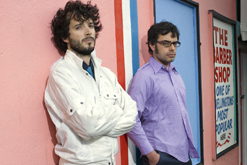 FLIGHT OF THE CONCHORDS

Hey, everybody, it’s Andy Gesner and the staff from HIP Video Promo, here with an amusing new clip from a novelty-pop twosome who’ve achieved worldwide fame on their own idiosyncratic terms. You’d be well within your rights to take it as a joke – after all, Flight Of The Conchords started as a sketch about “New Zealand’s fourth most popular guitar-based digi-bongo acapella-rap-funk-comedy folk duo.” But after winning awards on three continents for their off-the-wall performances, appearing on the Letterman Show, Conan O’Brien, and NPR, and taking star-turns at Bonnaroo and the Sasquatch Festival, it’s time to take the Conchords seriously as rock superheroes. Certainly, fans of their successful HBO series know that Jermaine Clement and Bret McKenzie are tuneful and talented, and they’ve got no shortage of inspired musical ideas. In fact, that’s the meta-joke of the Flight Of The Conchords television program: two skillful and self-aware performers pretending to be an inept pair of wannabes stumbling their way through the New York City club scene.

It’s a tension that’s well-exploited on Flight Of The Conchords, their first proper release (and one that made its debut at #3 on the Billboardcharts). The album is funny as hell, of course – but it’s also jam-packed with catchy choruses, skillfully-written melodies, and some remarkably effective vocal and instrumental performances, too. In fact, if Clement and McKenzie weren’t such good songwriters, their satires wouldn’t hit with anywhere near the force that they do. “Boom”, the horny Sean Paul send-up, is uproarious in its single-minded intensity; it’s also pretty damn funky. “Think About It” parodies politically-conscious soul so well that if you weren’t listening closely at the absurd lyrics, you might mistake it for an old Marvin Gaye track. “Inner City Pressure” is a hilarious chronicle of petty day-to-day frustrations; it’s also a sonic dead ringer for vintage mid-Eighties Pet Shop Boys. And from its synth-bleeps to its wonderfully dispassionate vocal performances, “Robots” – a sort of new-wave version of Spinal Tap – is simply letter-perfect.

“Ladies Of The World”, the lead single, takes on promiscuous seduction music; thanks to Mickey Petralia’s warm production, it could easily be mistaken for one of Beck’s successful experiments with twisted disco. Nima Nourizadeh’s clip for “Ladies Of The World” mines a similar seedy-Seventies aesthetic: Clement and McKenzie are dressed in period threads and, better still, put on rollerskates. Their amateur roller-boogie moves turn out to be enthusiastic and often surprisingly skillful. The ladies of the world are on wheels, too; as in the clip from the television program, the Conchords interactions with them have a clumsy, endearing charm. The whole thing is shot through gauzy filters and faded a bit to look like a genuine Seventies artifact. The finished product plays as an alt-pop counterpart to Snoop Dogg’s “Sensual Seduction” – and don’t be surprised if the Flight Of The Conchords track ends up on the same playlists.

Many thanks to Lacey Swain, Megan Jasper and the whole Sub Pop crew for bringing us on board and also hooking us up with plenty of copies of Flight Of The Conchords for your on-air giveaway needs. If you need more info, call Andy Gesner at 732-613-1779 or e-mail us at info@HIPVideoPromo.com. You can also visit www.SubPop.com to find out more about Flight Of The Conchords.