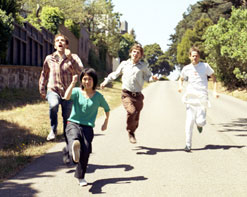 Greetings from waterlogged New Jersey! It’s Andy Gesner and the staff from HIP Video Promo with the creative and evocative new video from Deerhoof, a band which are often described as inventive, brilliant, frightening, and unchained. One thing they haven’t often been described as is poppy. But that might have to change after the release of The Runners Four, a wild merger of experimental recording and undeniably infectious songwriting. Critics and fans of the San Francisco four-piece have been hailing each new Deerhoof album as a masterpiece. We think The Runners Four is the set that compels the rest of the world to discover what Bay Area indie rockers already know: there’s no group in America that makes the “far out” seem so close by.

Pitchfork certainly thinks so. Reviewer Nick Sylvester assigns The Runners Four a 9.0. Ben Ratliff of the New York Times praises it as “miraculous..a defining statement…Deerhoof is one of the most original rock bands to have come along in the last decade…The Runners Four is, yet again, the band’s best work”. Indeed, where prior Deerhoof albums like the bracing Reveille and Apple O were blasts of steam heat, The Runners Four unfolds at a manageable pace, and reveals its mysteries slowly. There are still torrents of distorted guitar here (the nostril-clearing “Siriustar”) and angular, interlocking riffs (“Lightning Rod, Run”). But The Runners Four is probably most distinguished by its moments of weird psychedelic beauty and sudden, astonishing clarity. Much of this album is simply beautiful to hear.

“Wrong Time Capsule”, the single, is a piece of rough guitar psych with an immediate, sprightly melody and a vicious six-string solo. Singer Satomi Matsuzaki purrs the lyrics in her small, otherworldly voice, and guitarist John Dieterich carves up the track with the savage authority of a rusty blade. Greg Saunier, best known for sounding like he’s demolishing his drumkit with a sledgehammer, is unpredictable, syncopated, and powerful here. But he and bassist Chris Cohen manage to generate a pleasingly sludgy bottom end that is reminiscent of the Jefferson Airplane at their most evocative. High praise for a Bay Area act, certainly – but they’re deserving.

A band as forward-looking as Deerhoof needed to be matched with a video director with a similarly uncompromising vision. In Martha Colburn, the quartet has found a kindred spirit: an incorrigible indie with a noted edge. Colburn, a self-taught filmmaker from post-industrial Baltimore, made a name for herself with arresting two-dimensional cut-outs, disturbing image juxtapositions, and a willingness to ruffle feathers. Arty and visceral, full of found-image collage art and vibrant color, Colburn’s shorts have been screened on the white walls of museums and on dusty screens in the back of punk rock bars.

Colburn’s clip for “Wrong Time Capsule” is consistent with both her combative proclivities and the experimental sensibilities of Deerhoof. The band is represented as brightly-colored magazine cut-outs – their limbs bending at inhuman angles, their faces flushed with tears and solid paint. Matsuzaki is shown spinning on the wheel of fortune, and peering through twin dice where her eyes should be. The bandmembers appear to be in combat with currency: they emerge from dollar bills, they dance around coins, they’re harassed by the famous portraits of dead presidents. Toward the end of the clip, Deerhoof is chased and consumed by a giant cut-out of Ulysses S. Grant. Plenty of bands have made anti-commercial statements, but few have literalized their antipathy so dramatically, both visually and lyrically.

We are thrilled to be working once again with our friends at Kill Rock Stars to bring you this compelling clip. For those of you have heard of Deerhoof, but not actually heard them, here’s your chance to spread the word in your respective market. We have plenty of copies of The Runners Four for on-air giveaways and if you want to set up a Deerhoof contest, please get in touch. If you need more info, call Andy Gesner at 732-613-1779 or e-mail us at info@hipvideopromo.com. You can also visit www.killrockstars.com, or www.deerhoof.net/ to find out more about this Bay Area phenomenon.