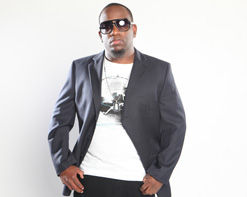 The alarms are going off, the cameras are fixated, and everyone’s looking at the new high roller in the house. It’s Andy Gesner and the HIP Video staff here with a hot new rapper on the Miami club scene who’s taking the music business into his own hands. African-born and Florida settled rapper Dmaze (pronounced Dee Maze) is set to grab hold of the country by the horns with his truly glamorous and sexy new video for “Like This.”

Dmaze is a Gabon, Africa native who set his eyes on our beloved expanses of clubland. He spent years traveling and absorbing the cultures of Africa, Europe, and now the States to create his own flavor of dance floor hip hop. Much like his idols, Dmaze is not just an artist, but also a producer, and businessman. Under his own newly established label and production house DMS Entertainment, Dmaze produces, releases, and promotes a number of rising stars, including his own recordings. Having a degree in International Relations has helped Dmaze promote his releases worldwide. In fact, his last video for “We Miss You” has garnered 50,000 views in a just a few short months. Though his core sound is hip hop and R&B, Dmaze often mixes African percussion and chants with European club melodies to keep things always interesting. As Dmaze puts it himself, “If you’re a chef, you cook with different spices. That’s the same thing. I try to be a chef and create something different in my music.”

“Like This” is the latest single from his upcoming album Unexpected, due sometime in the first half of next year. The song is laced with catchy beats and synths that fit well in any party setting instantly. It’s polished and pretty underneath like an Akon hit single, but at the surface, it’s Dmaze with his signature rap flow – smooth, fast, and fresh due to his unique accent. As spectacular as the production work is on this track, it will not distract you from the kind of “baller status” Dmaze likes to enter the scene with. The “Like This” video features the ambitious entrepreneur rolling around in some of the most coveted cars in the world, including a shiny red Ferrari and an Audi R8. Driving around Miami in cars like these is bound to attract some girls that are equally as beautiful… and Dmaze does, along with close to 15,000 views in just a few days. The clip follows the rapper from party locations, to hotels, to studios as he is constantly overcome by models. If there’s one thing we can all learn from Dmaze, it’s that it truly is great to be the producer and label owner.

We are thrilled to bring you this glitzy and glamorous clip from DMS Entertainment and Dmaze himself. We’ve got a galore of Dmaze goodies here at HIP HQ and would love to hook you up with some. Let us know if you’re interested in any contests or giveaways, if you’d like to interview Dmaze for your show. If you need more info, call Andy Gesner at 732-613-1779 or e-mail us at info@HIPVideoPromo.com and Dmaze at dmsentmusic@hotmail.com.