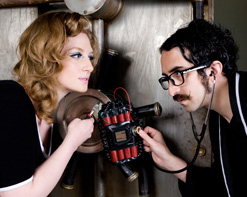 DO NOT FORSAKE ME OH MY DARLING

Hello programming folks across the nation, it’s Andy Gesner and the HIP Video Promo staff with a loud, unapologetic, and monumental new clip from the female-fronted duo of drums/vocals and bass – Do Not Forsake Me Oh My Darling, a band that has put more effort into their video than some artists put into their entire career! DNFMOMD have gone above and beyond the call of duty in the filming of “Episode 1: Arrival,” which pays tribute to the 1960s cult sci-fi show The Prisoner. In fact, the band has derived their name from the title of an episode of the show, which in turn was taken from the refrain of the theme song to the movie High Noon.

“Episode 1: Arrival” is a minimalist concoction that thrives on being energetic and loud. You will not find any layering or auto-tune in this sucker punch to the face. For that matter, you won’t find any 6 string guitars at all! The band focuses their sound on a distorted bass guitar, drums, and vocals that build tension all the way through to the bitter end. The band draws inspiration from the realm of proto-punk/new wave/no wave bands and dark songwriters like Joy Division, Einsturzende Neubauten, The Velvet Underground, Sonic Youth, Diamanda Galás, Nina Hagen, Teenage Jesus and the Jerks, Nick Cave and the Bad Seeds, PJ Harvey, and Leonard Cohen. “Episode 1: Arrival” is about honor, moral obligation, fear, and death in the boundaries of social norms.

One of the most interesting facts about this music video is that it is a shot for shot remake of the opening episode of The Prisoner. Do Not Forsake Me Oh My Darling have spent over a year in preproduction of this clip, and took 11 days filming it! The video actually premiered at The Prisoner convention in Portmeirion, Wales – where the series was originally shot. The attention to detail in this clip is simply unmatched. The video even features an exact Caterham replica of the car featured in the show – a Lotus 7 (less than 40 in the world!) and ends with the daunting and massive white balls of plasma that trap the residents within the city’s borders. If you have never seen the show or the recent remake on AMC, you should watch the opening sequence just to compare how closely this clip models the actual thing!

The band is currently two EPs (April 2010’s The New Number 2 and June 2011’s Questions Are a Burden to Others) into a project to write and record 17 songs, each one based on/inspired by an episode of the 1960s cult spy-fi TV series The Prisoner. DNFMOMD is also busy playing shows around their hometown area of Boston, MA and generating quite a buzz with the media. The Boston Globe has stated that the duo “is a fiercely churning alloy of voice, bass, and drums.” While The Deliwrites that “the EP is stuffed with creative angst,” referring to The New Number 2. Boston Phoenix also love the band’s “riffy weirdness topped by Cacciola’s [the lovely frontwoman Sophia Cacciola] husky sing-shouting.” DNFMOMD has some serious buzz with outlets like The Weekly Dig, ScifiPulse.net, Ryan’s Smashing Life and Sci-fi London all joining in praise of the record.

We are stoked to bring you this creative, over-the-top, artistic work from a duo of hard working rockers that absolutely deserve all of your attention and exposure. If you need more info, call Andy Gesner at 732-613-1779 or e-mail us at info@HIPVideoPromo.com. You can also visit www.DoNotForsake.com to find out tour dates and more information about Do Not Forsake Me Oh My Darling.