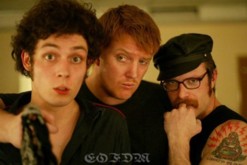 Greetings to all of my music video kindred spirits! It’s Andy Gesner and the staff from Hip Video Promo. Generally, we send you one video at a time. But Eagles Of Death Metal are a generous group, and they’ve coupled clips for the first two tracks on Peace Love Death Metal, their diesel-drenched debut. We’re happy to bring them to you on the same videocassette – a left-right combination of bruising, catchy independent music.

Please don’t be misled by this group’s name. These Eagles don’t shred, or finger-tap, or scream – in fact, they’re not a metal band at all. Instead, the three-piece (two guitars and drums, but no bass) is best considered part of the garage-rock revival. The riffs are trashy and Stonesy, the guitar is tough and gritty, the drums pound with punk menace, and singer Jesse “J. Devil Huge” Hughes croons lyrics about sex, money, devil worship, and joyrides through Texas in a smooth, supple tenor. Tongue-in-cheek, psychotically enthusiastic, often hilarious, the Eagles Of Death Metal proceed with the single-minded and near-messianic fervency that makes this sort of music so exhilarating at its best.

When you pop these videos in, it’s a pretty good bet you’ll recognize the drummer. Although he uses an assumed name on Peace Love Death Metal, his willfully absurd moniker (“Baby Duck”) can’t veil the familiar face of Queens Of The Stone Age frontman Josh Homme. But the Eagles Of Death Metal are no QOTSA side-project – they’re a delirious voice all their own, more inclined toward straightforward rave-ups and Southern-fried boogie than the arty rock-school exercises of Homme’s band. It’s the interplay between Homme’s powerhouse drums, Hughes’s abrasive, economical guitar, and Tim (“Timmy Tipover”) Van Hamel’s shrill, staccato lead playing that gives these Eagles their signature musical sound.

They’ve also got a distinctive visual style and fashion sense. Hughes’s motorcycle chic is on display in both of these clips: the dark glasses, the CHiPs mustache, the web tattoos and the super-cool, little-guy-with-a-big-punch stance. These are both performance clips, but they’re both abstract ones – playing as they do with the Eagles’ iconography of sex, darkness, day-glo nightmares, and the lure of the highway.

Directed by Gary Smithson, the “Speaking In Tongues” video is an exercise in dark hedonism; a blacklight fantasia of fast girls and faster guitar. Images stream by in a blur of flashing illumination: bikini-clad dancers, a frantically driven cymbal, cooing lips, studded panties, red light projected on a rippling cloth backdrop. It’s a seduction narrative, and Hughes is up to the task – if his performance communicates real dirtbag humor, it’s also earnest and endearing. Throughout, a heavy-lidded Homme hammers at his drums like a man possessed; his persistence feels more demonic than determined. The gyrating bodies of the dancers are superimposed over footage of the musicians. They hang over the players like constant reminders of the sexual itch. The visions are inescapable; we know what’s on the minds of these guys.

While the babbling and exclamations in “Speaking In Tongues” are meant to appear deliberately over-the-top – a deranged missive from the heart of rock and roll excess – “I Only Want You” is a more serious and disturbing affair. “I’m about to lay destruction on you / I’m not the lover man that you want me to be”, sings a chillingly matter-of-fact Hughes over a descending guitar riff. Director Jay Martin matches the track with a clip that’s less gonzo than “Speaking In Tongues”, but is every bit as kinetic. Here, the band, backlit and silhouetted, performs in black and white before blinding lights. Hughes caresses the microphone; his venomous lyrics dripping from his lips in a cool falsetto. Images from the “Speaking In Tongues” video reoccur: dancing girls, the old radio microphone, drums struck with the precision and determination of a vicious roach-stomper. The atmosphere is suffused with sweat and smoke, and when Homme throws his sticks away at the end of the video, it’s with casual disdain and finality.

Here at HIP Video Promo we’re very thankful to Rai Sandow at Ipecac Recordings and AntAcid Audio for the opportunity to champion this amazing band and serve up this double shot of music video madness. We have plenty of copies of the Peace Love Death Metal disc (including an awesome cover of Steeler’s Wheels’ “Stuck in The Middle With You”), goodies galore and anything you need to enhance your Eagles Of Death Metal experience. If you need more info call Andy Gesner at 732-613-1779, or email info@HIPVideoPromo.com.