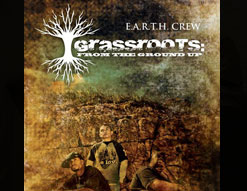 Hello programmers, it’s Andy Gesner and the HIP Video Promo staff with a brand new hip hop clip that has old school swagger and fresh rhyme schemes to help put a bit of thump into those television speakers. We are, of course, talking about one of the best new arrivals in the urban music solar system, E.A.R.T.H. Yes, each letter stands for something the same way this group stands to make a true movement in hip hop music. E.A.R.T.H. is an acronym for “Everything Around Revolves Thru Hip-Hop” and the group is making a statement with their music, “We hope to get the masses influenced by our sound of hip hop. Many have come before and never will they be forgotten. We are the newcomers to a tradition that must be upheld.” Fortunately, the group has more than enough resources to back up their claims with their fantastic double song video for “Hustle Juice/Swangin.”

The video starts out with the “Hustle Juice” segment of clip and features each member of the E.A.R.T.H. crew laying down their own verse. This is a pleasant throw back to the 90s era Hip Hop songs which featured all of the genre’s legends in the same group on a single track. What makes this approach work so swimmingly for E.A.R.T.H. is that each member has a signature pattern and rhyming style. Every part in the song continues to stay fresh and begs to be listened to again. Just when you thought you had these guys figured out, “Hustle Juice” transforms into “Swangin,” the second part of this dangerous double song attack. This explosive finisher results in all the members, joining in together for a catchy chorus to close out the track with one of the memorable lines in the galaxy.

The video, like the song, is a two part performance. The “Hustle Juice” portion of the video features E.A.R.T.H.’s Mr NO, Ro Tone, Write Words, and DOC Zais upfront to the camera and around their crash pad, as they lay down the rhyme and sip their hustle juice. Although the consistency of the actual hustle juice may never be revealed, it is guaranteed to get the party going. As soon as the crew finishes their drinks it becomes clear that the true hustle comes from the heart. It turns out this whole time the clip was setting up for a packed party performance that not only culminates in an explosive delivery of “Swangin,” but also shows that the crew makes their money through music. You see, the secret formula for success is simply by making music people want to hear and then having them come witness it in person!

The mob of fans in the clip aren’t the only ones who are taking notice of E.A.R.T.H.’s masterful production and value for quality in music. Grammy winning producers Tim Kelley & Bob Robinson have also been raving about the group, claiming E.A.R.T.H. reminds them of their favorite group – De La Soul. E.A.R.T.H. has also recently been featured on numerous hip hop blogs and magazines including Urb, Hypertune, Three Six Phive, HQ Hip-Hop, Carolina Hustle, and Rap Reviews just to name a few, as well as receiving tons of airplay on MTVu and participating in their Campus Invasion Tour a couple years back. Proving their craft to the masses, the E.A.R.T.H. crew has also been performing around the States, including massive underground hip hop festivals like the Fubu sponsored Hip-Hop Palloosa. With two full length albums underneath their belt, “Hustle Juice/Swangin” is a brand new seasoned track ready for public notice, and will be featured on their upcoming album later this year.

We are thrilled to be able to help break out a group of artists that truly deserves attention and respect in and beyond their genre. We have all the E.A.R.T.H. goodies for any giveaway and contest needs. Just give us a holler and we will have them right to you. If you need more info, call Andy Gesner at 732-613-1779 or e-mail us at info@HIPVideoPromo.com . You can also visithttp://www.earthcrew.bandcamp.com or www.YouTube.com/ItsMrNo to find out more about E.A.R.T.H.