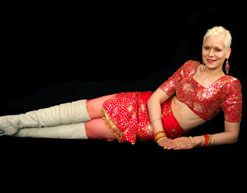 Hello friends, it’s Andy Gesner and the staff from HIP Video Promo, where we’re committed to the cause of bringing independent voices to wider audiences. Cultural cross-pollination may confuse those who want to pigeonhole artists in specific genres, but we applaud musicians who are brave enough – and visionary enough – to ignore national borders. The courageous Eva Coppola – EvaEva to her fans and listeners – was raised by musicians (her parents are the soul-pop duo Googie & Tom Coppola) on American rock, but so smitten was she with the sound of Brazilian music that she taught herself Portuguese. And she didn’t stop there: instead, she learned all she could about Indian bhangra, called on her DJ chops to add the influence of European electronica, and incorporated elements of both styles into her own compositions. The result is an astonishing blend of South American soul and Subcontinental sweetness, spiked with occasional techno beats and synthesizers and even the occasional punk rock guitar. Best of all, there’s nothing forced about any of it – all of her recordings feel natural, organic, and seamlessly realized. It’s an unprecedented international sound, fashioned with care by a genuine citizen of the world.

Ask EvaEva what she means by “Ziriguidum”, and she’ll tell you that the word is meant to evoke the sound of the pandeiro – the famously-expressive Brazilian version of the tambourine – and the sense of freedom found through surrender to the groove. There’s plenty of South American percussion in the track, but EvaEva has effortlessly blended the Brazilian drums with beats and instruments from India; this is a bhangra “Bollywood party” she’s throwing, and everybody’s invited. The singer promises to take us “from Bahia to Darjeeling”, and she manages exactly that, crafting an indelible aural travelogue. She’s an alluring tour guide, too: EvaEva’s vocals are rich, sultry, and just exotic enough to catch – and captivate – American ears.

Although it might surprise some devotees who’d swear she hails from Rio (or Mumbai), EvaEva is actually a New Yorker. The clip for “Ziriguidum” is a celebration of the multicultural essence of her home city – a chronicle of a town built by harmonizing traditions from all over the world. So director Sarah Miller and EvaEva don’t point their camera at staid, establishment Manhattan; they’re looking for something a bit more dynamic than that. In Jackson Heights, Queens, they’ve found a neighborhood that matches EvaEva’s music perfectly: not a melting pot, but an electrifying meeting-place of Asian, South American, and European cultures.

But as exciting as the neighborhood is (and it is!), EvaEva is the star of the clip. Dressed in traditional Indian clothing, she moves through the streets of Jackson Heights like a figure from a dream, each careful step radiating grace. Her dancing is otherworldly, but her path is terrestrial: she visits a neighborhood bodega, the Jackson Diner, the proudly-multicultural Golden Music record store, and a bridal shop. Wherever she goes, ordinary people are astonished by her ornate dress, her elaborate makeup and henna tattoos, and her understanding of classic Indian dance. Yet her appearance causes no friction or dissonance: in a community at the intersection of world traditions, she fits in just fine.

We are very excited to be working with EvaEva to bring you this inspiring new video. If you need more info, call Andy Gesner at 732-613-1779 or e-mail us at info@HIPVideoPromo.com.