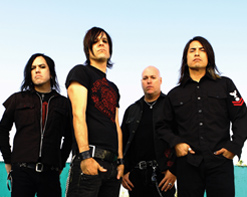 Hello to all my hard rocking friends! It’s Andy Gesner and my staff at HIP Video Promo, here with the latest clip from one of our favorite repeat clients. The Exies are a band respected by everybody who rocks: metalheads love them for their muscular six-string crunch, old-school alternative fans dig their update of Nirvana’s dynamics, and indie kids appreciate their honesty, songwriting smarts, and willingness to tackle serious subjects. Scott Stevens’s kickass quartet has toured with Mötley Crüe and Velvet Revolver and left the glam-crazed fans of those two bands in awe – but they also make music that’s gritty enough to slot into modern rock playlists next to The Foo Fighters and Chevelle. This year, The Exies released A Modern Way Of Living With The Truth, which is in many ways a culmination and perfection of the style they’ve been pushing for ever since their uncompromising debut, and their first for an independent label. Stevens and his band proved they could chart for an indie just as well as they had on a major, landing “Different Than You,” the lead single, in the U.S. Mainstream Rock Top 30.

Then again, The Exies have always been independents at heart; they’re a band unafraid to take risks and make bold moves. For instance, their second 2007 single isn’t an album cut at all – it’s an Internet-only release, and it’s accompanied by an incendiary clip that’s already become a sensation on video-sharing sites like YouTube. “God We Look Good (Going Down In Flames)” is a gutsy broadside against the state of contemporary media, a critique of celebrity culture, and a savaging of that which passes for political discourse on the modern airwaves. We have, Stevens seems to be suggesting, lost our nerve at a crucial moment, and we’ve become distracted by sideshows. “This is the pill, the pill that we swallow,” he howls, his reference to The Matrix evident, “the death of us all, the cash, the kill – they’re selling us off to make the deal.”

The video for “God We Look Good (Going Down In Flames)” is similarly confrontational – and similarly unapologetic. Images flash by, one after another, none lingering on the screen for more than a second. It’s like channel-surfing on speed, and at this rate, every shot projected becomes near-subliminal and loaded with meaning. But none of the footage assembled by The Exies will feel unfamiliar to anybody who’s got a television: we’re shown the faces of complicit politicians, shots of violence, sex, weeping celebrities carted off to prison, missiles, dollar signs, works of fine art, religious symbols, guns. The words “are you ready to go?” and “sell out” struggle to surface; they’re a message fighting its way through the chaos. Stevens, too, breaks into the frame from time to time, and he forces his way straight up to the camera to deliver his accusation, as if he’s besieged on all sides and wants to make sure he’s getting his message across. He grabs the attention of the lens and hangs on to his connection with his audience while he can, like a pit bull with its prey in its mouth. But the tilt-a-whirl of images rushes on, oblivious to objection and seemingly beyond control. Who cycles through these channels, and who stands behind the rush of content that now fills the televised airwaves? The implication here is that nobody is in control: that, instead, we’re all being washed downstream by a torrent of meaningless news and gossip, one greased by money and power but generated and perpetuated by its own sick momentum.

Getting you this video would not be possible without the help of our trusted friends Jason Spies, Sam Alpert and everyone at Eleven Seven Music. Many thanks to them on getting us yet another awesome reel of hard rocking videos. These guys have been so gracious as to hook us up with a nick stock of A Modern Way Of Living With The Truth for all of your on-air giveaway needs. If you need more info, call Andy Gesner at 732-613-1779 or e-mail us at info@HIPVideoPromo.com.

For info about the previous video from The Exies, “Different Than You” click HERE

For info about the previous video from The Exies, “My Goddess” click HERE