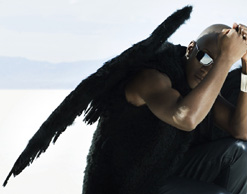 Hello fellow music lovers, it’s Andy Gesner and the staff from HIP Video Promo, here with a thunderous new dance track from a young artist making waves in the New York City club scene and beyond. Farrad isn’t afraid of creative reinterpretation; in fact, he welcomes it. With the irresistibly propulsive “Pick Your Face Up Off The Floor” sweeping through the clubs, Farrad isn’t calling it a victory — but an opportunity. The vocalist and dancer has placed his hit track in the hands of eleven capable remix artists (including Ron Kurti, Sharp Boys, and Heartour) and gave each one of them license to twist the song as cleverly as he could. The result?, a relentlessly entrancing remix album released to accompany The Time Is Now, Farrad’s outrageous debut.

Though his tracks always get the dance floor moving, there’s more to Farrad’s music than club beats. The Time Is Now is a wildly-entertaining fusion of trance and European techno, Beyonce-style flamboyant American pop, R&B, soul, old-school hip-hop, and even a little dirty Downtown funk-rock. And Farrad serves immediate notice that “Pick Your Face Up Off The Floor” is anything but an ordinary dance number — he sounds justifiably pissed off, and his tough-guy vocal is both unexpected and utterly convincing. The young singer lets all aggressors know that even though he brings peace, he’s more than ready to stomp bullies if he’s forced to.

His videos underscore the point. Farrad has a dancer’s physique — tall, graceful, and lithe — but he’s muscular, too, and there’s “just try me” menace behind those brown eyes. He’s a natural for video, too, moving with confidence and precision in front of the camera. In keeping with the twin release of The Time Is Now and the “Pick Your Face Up From The Floor” remix LP, we’re sending you two versions of the debut Farrad video: the original version, and another that’s every bit as sliced, cut-up, and smartly reassembled as Ron Kurti’s dazzling mix.

The clip finds a winged Farrad in the desert, accompanied by two female dancers. Sometimes he moves with them, and sometimes he’s completely on his own. Backlit by a roaring sun, he cuts an impressive silhouette — he dances sinuously, evocatively, powerfully. He needs to be: his dueling opponent is Shane San Miguel, the record-breaking motorcyclist and no stranger to the Bonneville Salt Flats. Miguel roars straight at Farrad, who holds his ground impressively; no matter how irresistible his opponent is, he won’t be intimidated.

The clip for the Ron Kurti remix doesn’t chop Greg Haggart’s original narrative to bits, but it does alter the flow and tempo of the video dramatically. Cuts come faster, light and video effects are more noticeable; at times, the whole screen seems to pulse with its own heartbeat. The restless footage freezes and un-freezes as Farrad dances, capturing him in some stunning poses as a still camera might. In one remarkable sequence, Farrad runs straight at the roaring motorcycle; flanked by his dancers, he charges forward. He may hit the salty earth after the collision, but his faith in his strength, charisma, and force of personality are unblemished.

We’re very excited to be working with both Farrad and Gabe Goldberg at Beulah’s Baby Entertainment to bring you this dynamic duo of videos. If you need more info, call Andy Gesner at 732-613-1779 or e-mail us at info@HIPVideoPromo.com. You can also visit www.Farrad.com to find out more about Farrad.