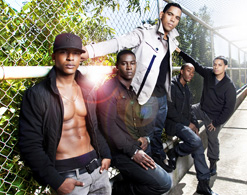 Hello programmers! It’s Andy Gesner from HIP Video Promo, here with a follow-up clip from Atlanta’s rising R&B group that has come a long way since we have last worked with them in 2009. The fine young men of Final Draft are back in the limelight with their catchy-as-hell new single “Do It.” The group delivers on all fronts: the star power, the rapping flows smoothly, and the singing is nothing short of electrifying. The quintet exhibit the same perfect chemistry that they did in their recent hit single “Get At Cha,” taking hints from legendary groups like Boyz II Men and Blackstreet, allowing each member’s talents complement each other undeniable harmony. The Final Draft guys Voice, Divine, D-Nyce, Fashun, and Lucky are each uniquely and infinitely talented, but form the ultimate team when their strength are combined in performing together.

The group has made their entry into the music world with the aid of the internet, as their first few songs became viral sensations, racking up hundreds of thousands of plays in a matter of weeks on MySpace and other social-networking sites. The attention the band received skyrocketed them to appearing on BET’s The Mo’Nique Show and 106 & Park, Soul Train, performing at the 2009 Urban Music Awards in New York, and an MTV debut, performing on an episode of Super Sweet Sixteen. The group also performed the Hot97 hosted “I Will Graduate” Pep Rally at the Tribeca Performing Arts Center. The group has also been busy touring the nation, giving pitch-perfect performances. The group has also recently joined teams with the legendary Teddy Riley, who has penned hits and created careers for artists such as Bobby Brown, R. Kelly, Lady Gaga and the late great Michael Jackson, as well as for his own groups that he was a part of, including Guy and Blackstreet. Riley has inducted the group into his many branding companies with one mission, as he wholeheartedly declares himself: “Final Draft will be the number one guy group in the U.S.” When Teddy Riley speaks, we all listen.

This fab-five R&B group delivers another radio ready hit with “Do It.” Unlike a lot of R&B tunes these days, the song is composed of complex song structures that build up on top of each other, delivering hook after hook. Just when you’d suspect that the part you are hearing is a catchy chorus, the part afterwards comes in louder and sticks even harder. This sort of ladder progression of musical ecstasy keeps you hooked from start to finish. “Do It” is also packing some serious star power, featuring the hip hop superstar Yung Joc. The group also employs a guest rapper appearance by JBar, famous in the rap scene thanks to his hit “Daze” with Soulja Boy. The video complements the song with its clean and crisp feel, allowing each member to showcase his skill and image. Every scene finds the Final Draft boys impressing all the ladies, as they cannot resist their charm. Filmed almost completely in a white screen setting, “Do It” shines with bright atmosphere and upbeat energy.

We’re very excited to be working with the folks at Earl Jam/Universal Music Group to bring you another excellent video from Final Draft. If you’d like to get your hands on some Final Draft swag or catch up with the group for a video interview when they are in your area, please drop us a line! If you need more info, call Andy Gesner at 732-613-1779 or e-mail us at info@HIPVideoPromo.com.