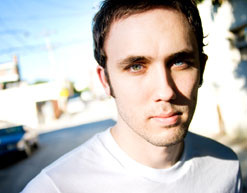 Hello! It’s Andy Gesner and the staff from HIP Video Promo, here with a brand new clip from one of Indie Nation’s most enterprising figures. We’ve all seen music videos shot in high schools, and we know how they go — generally, the artist plays the suave renegade, rebelling against the “square” instructor. Not so for Brad Skistimas of Five Times August. In the heartwarming and frequently funny clip for “Better With You”, the singer-guitarist takes on the role of the straight shooting teacher, fending off the assaults of the class reprobates. It’s an unusual — and refreshing — portrayal, and one certain to endear Skistimas further to his rabid national fanbase. Not many rockers would have the self-confidence to cast themselves in the role of a beleaguered teacher. But Skistimas has been turning rock and roll convention upside-down for the better part of a decade; there’s no reason his videos should be any different.

Plenty of independent artists have declined record deals and kept autonomy over their careers; Skistimas is the rare D.I.Y. musician who has achieved recognizable mainstream success on his own terms. We’re sure you remember the clip for “The Good Life” from last year’s effort, Brighter Side, but did you also know that every single song on The Independent, his bestselling self-release, has been licensed for use on a broadcast television program — some by more than one? “Better With You”, the song we’re bringing to you today (which is being rerecorded and revisited for the new FTA album along with other fan favorites), has been featured on no less than seven programs across four different networks, including The Real World, Laguna Beach, Fox Reality’s Amazing Adventures Of A Nobody, and the Lifetime Channel’sMonarch Cove. Five Times August has earned the distinction of becoming the first unsigned act to be carried in Walmart stores; although there’s no label on Skistimas’s LPs, they still retail at Borders and Best Buy.

None of this would have been possible were it not for Skitsimas’s remarkable relationship with his fans. He’s toured the country on his own dime and won converts wherever he’s played; many listeners consider him a personal friend as well as an entertainer. This summer, they had an opportunity to give back: Five Times August sold advanced copies of the upcomingLife As A Song through Kickstarter.com, and, through an imaginative campaign of enticements (including autographs, musical instruments, and even a camping trip with the artist!), solicited contributions from supporters. $20,000 later, Five Times August has raised enough money to make Song the hit it’s meant to be — and Skitsimas can boast of another wildly successful guerrilla marketing campaign.

Yes, beating the majors at their own game is what Skitsimas does — and the “Better With You” clip is just another example of his stunning ability to turn pocket change into professional-quality work. The video is as well-shot as any high school dramedy you might encounter on the WB or Fox, and the female lead is just as winsome. As for Brad Skistimas himself, he’s wholly believable as the geeky teacher doing his best in trying circumstances. The classroom bullies may torment him, and unfairly, too — but rest assured, they get their comeuppance, and with thoroughgoing poetic justice. With Five Times August, a happy ending is a guarantee.

We’re very excited to be working with the Five Times August crew to bring you this endearing clip and are your source for all things Five Times August. Drop us a line if you’d like to catch up with Brad when he is on tour this fall, chances are he is coming to a market near you! If you need more info, call Andy Gesner at 732-613-1779 or e-mail us at info@hipvideopromo.com. You can also visit www.facebook.com/FiveTimesAugust/ to find out more about Five Times August.