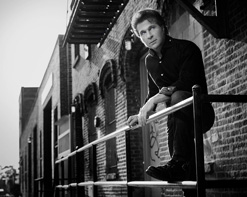 “My favorite song on the album is “Rainy Night in Georgia,” written by Tony Joe White.
Shiner’s wonderful voice, pregnant with vain regrets and lost causes hang in the air like smoke. And you have to love the way the brass and organ complement the melody. A great arrangement.”
-The Huffington Post
3/24/17

It goes without questioning that “Blue-Eyed Soul” singer Frank Shiner has demonstrated his finely-tuned capacity to put his own unique imprint on classic tunes that have been previously recorded by others via his newest release of “Rainy Night in Georgia.” Giving astonishing performances on songs popularized by such artists as The Rascals, Brook Benton, Sam & Dave, Elton John, Bill Withers and Donny Hathaway, Frank has created a tour-de-force collection of twelve songs from the songbooks of legendary writers such as Randy Newman, Doc Pomus and Isaac Hayes among others with his latest sophomore album LONELY TOWN, LONELY STREET, including the “Rainy Night in Georgia.”

Born in Wilkes-Barre, Pennsylvania, Frank’s love for music and theatre first found expression when he was cast in the role of Henry Higgins in My Fair Lady. After nearly two decades of paying his dues as a father, husband and a business person, Frank returned to singing following his wife Suzanne’s battle with cancer in 2009 after she encouraged him to sing one night at a local open mic night. The audience’s reaction led Shiner back to performing on a regular basis. Frank has gone on to win two L.A. Music Critic Awards.

Frank collaborated with A&R veteran Mitchell Cohen on LONELY TOWN, LONELY STREET as well as on his critically-acclaimed 2015 debut album, The Real Me.  He also worked with producer Jay Newland, who suggested “Rainy Night In Georgia” It was the last song he recorded for the album. Released in October 2016, Frank’s intoxicating interpretation of the yuletide classic, “Please Come Home For Christmas” served as a prelude to the March 2017 release of LONELY TOWN, LONELY STREET.

“Rainy Night In Georgia” is as soothing a video as we’d expect. This is more than a typical “day in the life of” videos, but rather a laid back reinterpretation of what it means to be Frank Shiner. The camera discreetly follows Frank on a press tour, hitting a cleverly inserted performance on the Georgia Music Network, sit-down interviews, and of course, the nights away in far away towns and anonymous motels. While he’s doing his thing, his phone lights up with messages from Suzanne to let him know that he is on her mind. Once he’s finally able to sit down and catch his breath, Frank cuts through the lull of the evening to Suzanne know that he’ll be home soon. It’s a small ray of light on this dark, gloomy night.

With a video this soothing and delightful, we’re confident that programmers and viewers alik will flock to Frank Shiner. Of course, you can always contact us here at HIP Video Promo for more information. Please call us at (732)-613-1779, email us at info@HIPVideoPromo.com. You can also visit www.FrankShiner.com for more info on Frank Shiner.