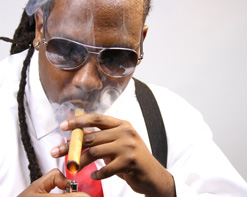 Some rappers like to talk about the hard life of hustling, but some actually have been through it. It’s Andy Gesner and the HIP Video crew with a hip hop artist that writes rhymes about the streets, society and the deep stories that happen in the everyday life but nobody talks about. If you ever dreamed of GTA being turned into a full-blown video production, this video borders on that line of intensity, with underground deals, hot cars, loose women, and, of course, helicopters! Welcome to the world of Freddie Gz (pronounced “geez”) and his video for “Trap Talk.”

Fredly Saurel, better known as Freddie Gz, is the ambitious rapper born in Jacmeal, Haiti and raised by the streets of Columbia, South Carolina aka “The Metro.” Freddie Gz’s career took off when he opened for Mr Flip, which led to sharing the stage with Petey Pablo, Young Bloodz, and Pastor Troy. Gz recently collaborated with Naturi of the popular girl group 3LW (now known as The Cheetah Girls). To up his fanbase Freddie Gz turned to the proven old school method of distributing physical mixtapes around the streets of South Carolina, flooding the scene with over 10,000 copies! The mixtapes include hosts like DJ Khaled, DJ Frosty and Charlamagne Tha God, and earned features in blogs such as SheBloggin, DatPiff, Indy Mixtapes,Yo Raps Magazine and more. Freddie Gz is a versatile artist due to his ability to adapt to different styles, drawing inspiration from Notorious B.I.G., Young Buck, Trick Daddy, Rick Ross and Plies. Freddie Gz and the “south swag” trait makes him an exciting new entry into the genre.

“Trap Talk” is a harsh reminder of how difficult life could be outside the law. The track starts off listing all of Gz’s comrades that are now behind bars, and then proceeds to describe the lifestyle that got them there. As Freddie chronicles his day, it is easy to tell that this rapper is no stranger to the hustle. To add to the story, Gz lays his rhyme over several layers of classic production and beats. The video portion of “Trap Talk” plays out like a scene from the popular Grand Theft Auto series. Gz brings out his best Niko Bellic, arriving on the scene in a helicopter and then jumping into a luxury SUV convoy set to take him to his various rendezvous locations. We get to see Gz take care of “business” and then kick it back at his pad with his girls. It’s not easy being Gz, but it’s an adventure he’s ready to take and share with you.

Take a step away from the club hip hop scene and bring your viewers into the intricate world of a rapper who doesn’t hold back in sharing his story. We have lots of Freddie Gz stuff here at the office and would love to hook you up with it for giveaways and contests. So if you’re interested, let us know right away. If you need more info, call Andy Gesner at 732-613-1779 or e-mail us at info@HIPVideoPromo.com.