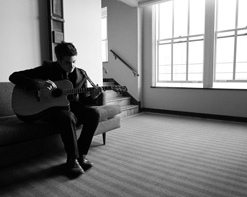 Hello programming brothers and sisters! It’s Andy Gesner – your source for all that is music video goodness, along with the rest of the HIP Video Promo crew. We’ve got a euphoric dose of melancholy headed your way from an LA-based singer/songwriter that intends to bend the rules of the indie rock genre. Friend Slash Lover is a fearless venture into the unexplored sonic landscape, driven by one man’s creative restlessness. Get your programming spacesuits on for a one-way journey into the cosmos of echoes, for you are about to embark into the vast and unpredictable world of “Breakin Up.”

Josh Mintz, the man behind the wheel of Friend Slash Lover, is a creative visual artist who is famous in California for his design work as well as his contribution to the street art in San Diego. As an untamed artist, he once stumbled upon an open tuned acoustic guitar one of his friends left at his flat. This incident instantly evolved into several songs, which were recorded with the complimentary sounds of distant guitars, piano and desolate lyrics. The result turned out to be the beautifully dark As American as Ones and Zeros, which has already picked up steam with the press. Flavorpill LA calls the record “one of this year’s most underrated efforts,” comparing it to Radiohead and Sigur Ros. The Huffington Post destines Friend Slash Lover for Coachella next year. The album has also received raves from Pop Making Sense, Jester Jay Music Blog, and Inside SoCal/Press Telegram. MusicConnection Magazine has also named Friend Slash Lover one of their “Hot 100 Unsigned Artists of 2010.”

“Breakin Up” is a gorgeous tribute to infinite sadness, strumming on the open acoustic guitar in the same way it strums on the heart strings. The song builds up from start to finish, adding drums, piano, percussion, and guitars as it grows and evolves into a glorious full band ballad. The theme of the song can be foreseen by the title, but it’s always the delivery that counts, which is why this single packs a massively visual video to go along with the sound. “Breakin Up” centers around Mintz as he travels the lonely road from his home to the city streets. However, as he comes in contact with objects, they crack and fall apart. Eventually the whole city collapses into rubble around him, created by very cleverly designed computer effects. “Breakin Up” just might be the perfect distraction to all the bright clips of summer, allowing listeners to sit back and ponder their choices, while connecting with their darker emotions.

We are thrilled to be part of the Friend Slash Lover campaign and hope you find a welcome home for this wonderful and deserving work of art. We’ve got lots of Friend Slash Lover stuff here for giveaways, so just give us a holler to get some sent your way! If you need more info, call Andy Gesner at 732-613-1779 or e-mail us at info@HIPVideoPromo.com.