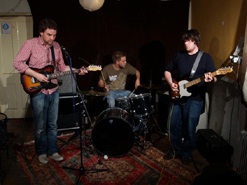 Cheers, music video lovers; it’s Andy Gesner and the staff from HIP Video Promo! How do we know when an album has become a classic? Big-budget major-label releases achieve near-historic status almost instantly: they saturate the airwaves and inscribe themselves into the collective consciousness. Indie records have a tougher hill to climb, but through word of mouth and the alternative press, some do manage to get there. A few independent albums are so undeniable and consistent that they win converts wherever they’re played; they become part of the story of the times. We don’t know for sure, but we reckon that when the tale of 2008 is told, The Midnight Organ Fight by Frightened Rabbit will be part of the soundtrack.

These days, Frightened Rabbit has some pretty big names spreading the word. The members of Death Cab For Cutie are fans; Nick Harmer called Midnight Organ Fight “lyrically perfect” and said the songs “hit him right in the heart”. Harmer was echoing the sentiments of adventurous music listeners on both sides of the Atlantic who’ve fallen in love with the album – but unlike most, he was in a position to help the Scottish quartet expand their audience. This November, Frightened Rabbit will be touring Europe in support of Death Cab, bringing their dazzling songs to festival-sized crowds across the EU.

It’s an auspicious pairing, and not just because there’s mutual respect between the two bands. Like Death Cab, Frightened Rabbit plays indiepop with an edge – penning astonishingly honest songs about unraveling relationships, communication failures, and the painful ambivalence of young adulthood. Sing The Greys, the Frightened Rabbit debut, established singer Scott Hutchinson as one of the most endearing confessional songwriters to emerge in years; The Midnight Organ Fight added rock muscle and evocative electronic flourishes to the band’s intimate sound.

A breakup album, Midnight Organ Fight is steeped in disappointment, confusion, and regret. But although the wreckage of a romantic relationship is unflinchingly examined, thereís not an ounce of bitterness on the set. Hutchinsonís refusal to wallow in ugliness makes him an uncommonly easy singer to root for. Case in point: ìI Feel Betterî, the latest single from the album. Here, the bewildered narrator leaves New York City after getting dumped ñ heís confused and distressed, but he also has to admit to himself that losing the girlfriend has occasioned an unexpected uptick in his mood. By the end of the song, heís positively energized, drunk with newfound freedom, maybe a bit delirious. Mixed emotions have rarely been so rewarding, or so rocking.

The video for ìI Feel Betterî explores ambivalence, too. The animated clip follows an artist through his day-to-day activities ñ but as always with Frightened Rabbit, thereís a twist. To his dismay, the character discovers that heís surrounded by red arrows radiating in all directions, each one representing a different option. The same thing happens when he sits down to paint: a green dot on the canvas is suddenly ringed by those same arrows. Paralyzed by indecision, he reflects on quantum theory ñ each choice not taken creates a possible future in an alternate universe. A mechanic as well as an artist, he plugs into a machine that shows him all of those possible futures, projected on the interior walls of a cylindrical tunnel. Beautifully drawn in stark black lines, the ìI Feel Betterî clip is philosophy on a human scale ñ theoretically sophisticated, yet unabashedly heartwarming.

Visit
www.FatCat-USA.com, or www.FrightenedRabbit.com to find out more about Frightened Rabbit.