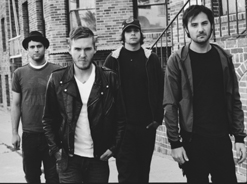 Hello programming friends! It’s Andy Gesner and the tireless staff from HIP Video Promo, and today, it’s our great privilege to share the latest video from a young band with a sound big enough to shake the globe. They’ve driven crowds wild on both coasts, and everywhere in between. But it’s with special excitement that we repeat what you surely already know – The Gaslight Anthem hail from our backyard in Central New Jersey, and they couldn’t be prouder of it. Indeed, Brian Fallon’s quartet epitomizes Garden State rock at its best – they’ve got that Shore swagger, the factory-town punk intensity of The Bouncing Souls, the literate fury of Ted Leo & The Pharmacists, and the passion, urgency and sonic grandeur of Bruce Springsteen himself. Not since the rise of the E Street Band has an independent-minded group from the Garden State captured the world’s imagination so quickly, or so firmly.

Here in New Jersey, The ’59 Sound, their second album, is already acknowledged as a classic. The rest of the country – and the world – is rapidly catching on. Crammed wall-to-wall with bracing, irresistible, instantly-memorable rock, The ’59 Sound has connected with audiences (and knocked rock critics dead) on both sides of the Atlantic. Kerrang! gave it a perfect score; Punknews.org praised its excellent mixture of old and new, punk and soul; Pitchfork called it “an answer to a prayer”. And late last year, eMusic listeners named The ’59 Sound the finest album of 2008

How have they done it? With tracks so straightforward and heartfelt, they sound as if they’ve always existed; songs that feel authentic and canonical. If you like rock music, well, here it is in its purest and most elemental form. Every word out of Fallon’s mouth rings true. He acknowledges his debt to his musical and literary forebears: “Great Expectations”, the latest single, quotes Bob Seger even as it references Charles Dickens. It all springs from the same source, Fallon seems to suggest; the same inspiration that is available to anybody brave enough to lay his emotions bare.

As you might imagine – or as you may have seen for yourself – The Gaslight Anthem are a phenomenal live band. They’ve shared stages with Against Me!, The Loved Ones, and Rise Against, and later this year, they’ll support The Boss himself at the Hyde Park Calling Festival in London. It’s no coincidence that all their promo clips have shown the group in performance: Fallon and the band are electrifying onstage, and they’re determined to make you know that. Kevin Custer’s kinetic clip for “Great Expectations” captures some of that concert magic – his cameras find the band in action inside a grey concrete room. Chandeliers hang from the ceiling, the floor is wet, and the musicians in The Gaslight Anthem are entirely within their element. Custer doesn’t have to show you what’s happening in the song – Fallon is such an effective and charismatic storyteller that he brings the narrative to vivid life without the aid of images. When he sings of car lights, you’ll swear that the beacon shining on the band is the headlamp of a vintage automobile.

Just in case you missed them – and because we know you’ll want more – we’ve also appended the first two clips from The ’59 Sound. The video for the title track is a performance clip, too – but this time, daylight pours in from the windows of a typical North Jersey suburban house. The Gaslight Anthem are set up in the living room, and they’re playing and singing with immense energy. In the “Old White Lincoln” video, the fliers on a public messageboard come to life: the photos of the band on the posters spring into glorious action. As veterans of Jersey punk rock clubs, The Gaslight Anthem know all about d.i.y. postering – even if it isn’t something they’ll be doing much of now that they’re established international stars!

It’s a distinct pleasure for us to be working with Eddie Eastabrooks, Johnny B. and the entire Side One Dummy Records crew to bring you this collection of Gaslight Anthem videos. In case you’ve been living under a rock and have not had a chance to check out The ’59 Sound, or would like to get your hands on some copies for on-air giveaways, please let us know! The band will also be traversing the country from now until the end of May on their headlining tour, so please let us know if you’d like to set up a video interview or catch a show when they are in your market! And as a special added bonus on this campaign, we’re happy to announce The Squawk About The Gaslight Anthem Contest, where everytime you program any of the three videos, you enter a drawing to win an autographed The Gaslight Anthem drumhead and assorted other The Gaslight Anthem goodies! If you need more info, call Andy Gesner at 732-613-1779 or e-mail us at info@HIPVideoPromo.com. You can also visit www.SideOneDummy.com or www.GaslightAnthem.com to find out more about The Gaslight Anthem.