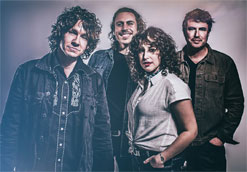 When GOODING plays rock, they do so with absolute abandon and total commitment to the moment. These four Nashville-based musicians have never tried to filter their emotions – their songs come straight from the soul. Yet they’ve got a different attitude altogether when they’re talking to high school groups about fiscal responsibility and financial literacy in the age of e-commerce. Funding The Future, the charity they’ve set up, recommends a thoughtful, prudent approach to personal economics. Because they’re so passionate about the music they make, they’re able to speak to young people with absolute authority on subjects they might not be thinking too hard about. The Funding The Future initiative has been so successful that it was featured on CNBC, NPR’s All Things Considered, and The Wall Street Journal. That’s hardly the only exposure that GOODING has been getting lately. The band has placed songs on CSI, Portlandia, the trailer for Walking Dead, and many other programs.

It’s also not the only cause that the members of GOODING have adopted. They’ve performed on military bases and at Walter Reed Hospital, and dedicated themselves to the Physician’s Committee for Responsible Medicine. They write constantly, they tour constantly, and in addition to their national tours, they speak at 80 to 100 high schools a year: when they see something worth doing, they never let anything get in the way of the mission.

Building The Sun, the group’s upcoming album (out September 21), was produced by Matt Wallace, who has worked with Train, Blues Traveler, and Maroon 5 on the Grammy-nominated Songs About Jane.

“Because It Hurts”, the lead single from Building The Sun, contains everything that has made GOODING a cult favorite among fans of blues-rock, Americana, and pop-soul. It’s a frank, funky, and forthright song about emotional vulnerability, and vocalists Gooding and Erin O’Neill sing, as they always do, with complete conviction. Wallace and the band have captured the energy and expansiveness of GOODING’s performances: this is a studio creation, but it sounds like a classic live recording.

There’s plenty of footage of Gooding in action in the clip for “Because It Hurts”. But we think this video will be remembered best for its digital effects and its imaginative approach to the frame. In a visual metaphor for stifled self-expression, Gooding kicks at the edges of the screen, only to find them closing in on him. By the end of the video, he’s singing between two tight black parallel lines. No matter how confining they become – no matter how they press on him – he makes sure he gets his message through.

Here at HIP, we’re profoundly thrilled to be working with GOODING, and we hope you embrace the brand new clip for “Because It Hurts” as much as we have. This hard rocking quartet is impossible not to root for and we’d love to see this new visual added into your regular programming and online presentations in a timely fashion! Rest assured we’ll have plenty of GOODING merch available for on-air contests and giveaways so please don’t hesitate to get in touch. For more information on GOODING please contact Andy Gesner and the HIP Video Promo team at (732)-613-1779 or email us at info@HIPVideoPromo.com. You can also check out www.goodingmusic.com for more info.