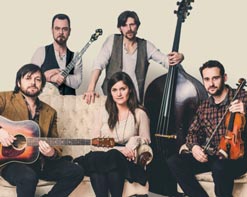 By now we’re certain you’ve become a fan of Ireland’s I Draw Slow, thanks to their “Goldmine” video that came your way several months back. “Goldmine” was a beautiful clip from their Red Hills album, but in truth it was merely a warmup for the video we are bringing you today! The first single from their new album, White Wave Chapel, “Valentine” is a perfect encapsulation of folk, bluegrass, and acoustic sounds that has made I Draw Slow a must-hear group. The band recently performed a string of sold out US dates supporting White Wave Chapel, with all of this attention catching the attention of Game of Thrones‘ Aidan Gillen, who stars in the new video for “Valentine!”

The song is an ode to one of the most popular, but oddly enough also one of the least referenced, holidays in contemporary culture. In a recent interview, lead singer Louise Holden said of using Valentine as a theme “it’s not an overused concept, it should be, but it isn’t. I thought we could have a go at it without it being too trite…” The lyrics paint Valentine as someone who she clearly has strong feelings and dedication to, but who is really just a selfish person that views the relationship with only their own needs in mind. The performance all around is flawless, and the combination of guitar, bass, banjo, and violin create a layered and lush blanket to showcase Holden’s voice.

For the “Valentine” they teamed up with director Hugh O’Connor and like any good band is prone to do, took over a local pub for the night! Holden plays the lead actress, opposite Aidan Gillen (best known as Petyr ‘Littlefinger’ Baelish in HBO’s Game of Thrones) who plays the character of Valentine. Holden enters the bar looking for Valentine, who is chumming it up with his friends at the bar, enjoying pints of Guinness and a game of pool. His demeanor takes on a decidedly more sinister feeling once confronted by Holden, and her need to talk to him one on one about the issues that ail them. His brooding vibe envelops the entire bar until they finally come face to face in the hallway. We don’t want to give anything away, but you can probably imagine what happens when this much tension is uncorked……

We’re incredibly pleased to be working with I Draw Slow once again, and are confident that this is a video you’ll snap up for your programming in no time. If there’s anything you need to get this video into rotation please don’t hesitate to get in touch and we’ll hook it up! For more information contact Andy Gesner and the HIP Video Promo crew at (732)-613-1779 or email us at info@HIPVideoPromo.com . You can also visit www.IDrawSlow.com for more info.

For info about I Draw Slow’s “Goldmine” video, click HERE